The economic boon of immigration reform

The Joe Biden $1.9-trillion coronavirus relief bill looks set to pass the Senate as it did the House, and be ready to be signed into law, even though right wingers preach about woe and doom as they blatantly worshipped a ...

Beyond citizenship for the undocumented: the other facets of the U.S. Citizenship Act of 2021

Right wingers like Marco Rubio, whose grandfather was once detained as an undocumented immigrant and deported back to Cuba; and Crazy Jim Jordan of Ohio, who was quick to gloss over the insurrectionists, are now hard at work calling the ...

Andrea Meza, director of family detention services for RAICES, which stands for Refugee and Immigrant Center for Education and Legal Services, had an interesting question for the Joe Biden administration this Black History Month, on the heels of the deportation ... 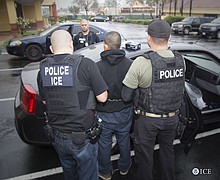 Back in 2018, Zachary Mueller penned a piece for America’s Voice titled: ‘The Many, Many Reasons Why ICE is a Rogue Agency.’ Of course, this was in the height of the Donald Trump administration, so many of course blamed Trump.

President Joe Biden on Friday, Jan. 29, 2021 wisely choose to delay an executive order on asylum and reuniting families separated at the border.

Five things that President Biden has already delivered for immigrants

President Joe Biden is off to a good start on the immigration front, reversing the draconian policies of Donald Trump and doing his best to make up for the Barack Obama immigration policies that earned the U.S.’ first Black president ...

A light at the end of the tunnel for immigrants

The Trump era comes to a close on Jan. 20, 2021, but even with the clock ticking down on his one-term administration, The Donald and his xenophobic pipers are rushing to ensure they push through last minute hardline immigration policies.

Let’s face it: when it comes to Republicans and Democratic lawmakers in Congress it’s definitely a rock and a hard place scenario.

The immigrant heroes of 2020

Last year, I began a tradition of naming Immigrant Heroes who made a mark in 2019. This year, I round out the year by continuing this tradition, but this time by choosing groups of immigrants, who in my opinion, made ...

Immigrants, we get the job done!

Fast facts to applying for DACA 2020

Based on an order by a United States District Court judge in Brooklyn, NY on Dec. 7

Another court battle was lost by Donald Trump and his administration late last week.

Anxious to weaken his party’s influence ahead of the next general elections.

5 immigration changes the Trump admin is ramming through

Donald Trump’s days in the White House are now thankfully numbered, but that’s not stopping his administration from ramming through several immigration policy changes that could create tremendous bottlenecks for the incoming Joe Biden administration and the first Caribbean-born nominated ...