USA women’s basketball has two unexpected losses prior to Olympics 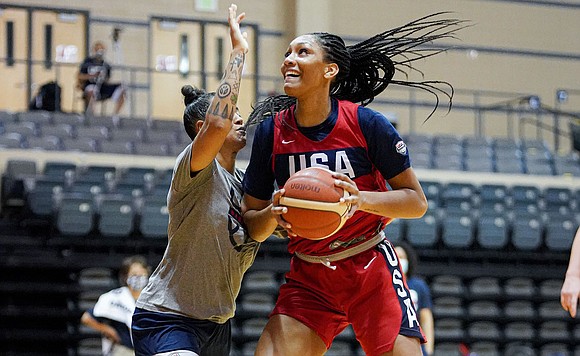 A’ja Wilson was the leading U.S. scorer in the game against Nigeria USA Basketball photo

The U.S. women’s Olympic basketball team scored a much needed 93–62 win over Nigeria in its final exhibition game prior to heading to Tokyo for the Olympic Games. Prior to the Nigeria game, Team USA had two uncharacteristic losses, first losing to a team of WNBA All-Stars and then to the Australian team, which included New York Liberty veteran Rebecca Allen and former Liberty player Leilani Mitchell.

“I think we played a really good game on both sides of the basketball,” said first-time Olympian A’ja Wilson, the higher scorer for the U.S. team in the win over Nigeria. “This is a game we needed to help us head into Tokyo just confidence-wise. I know for myself, this is good to have everyone get involved and engaged.”

Wilson acknowledged that the players were a little rattled by the losses. In the match-up with the All-Stars, Arike Ogunbowale was on fire. Also, a couple of players may have been on a mission after not making the U.S. Olympic team. What made the Australia loss all the more surprising is that the team was without Liz Cambage, who has decided to skip the Olympics, citing mental health.

“I just want to do everything that I can to be in my role and be consistent,” said Wilson, who noted that people talk and were eager to be critical of the U.S. team. “Once I got in the locker room, the vets said, ‘It’s OK. It’s part of the game.’ Then coach [Dawn Staley] came in today and talked about getting back to our dominance. That helped me feel a little more at ease and understand that the people we have in that locker room are so talented and we know what we’re doing.”

Staley, the first Black female head coach for an Olympic team, was pleased that the team played more cohesively. Many of the baskets were made on assists, and post player Brittney Griner said the players focused on whoever was open.

The U.S. will face Nigeria again soon, as that is the opening opponent in Olympic play. Several of the players for the Nigerian team have U.S. ties, either growing up in the U.S. or playing college ball. It remains to be seen if Nneka Ogwumike or Chiney Ogwumike will be on the team. After being denied by FIBA, an appeal has been filed with the Court of Arbitration for Sport. Erica Ogwumike and Elizabeth Williams of the Atlanta Dream played in Sunday’s exhibition game.