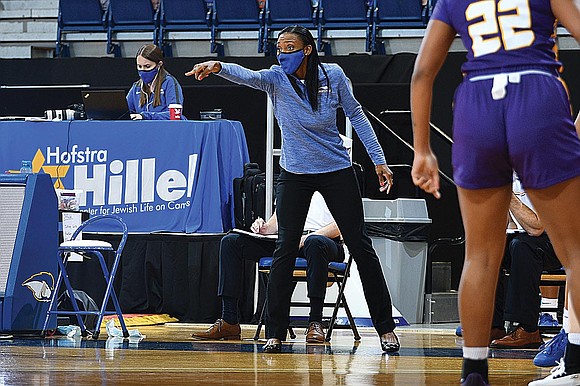 It is a season like no other. Division I women’s basketball is in play, but coaches and players understand that practices and games may be cancelled on short notice. Some teams have stepped away from the action. Several weeks ago, the Ivy League cancelled all winter sports. After opening 3–1, Duke University women’s basketball cancelled the remainder of its season due to concerns over health and safety related to COVID-19 (Duke’s men’s team continues to play).

The women’s team at Hofstra University is in action, amassing a 3–5 record so far. In her second season as head coach, Danielle Santos Atkinson is keeping her team motivated and focused, but she understands each day is a gift.

“There is no manual for this,” said Santos Atkinson. “I have incredible mentors and leaders that I’ve been able to work with, and I can always call on them [and ask questions]…but there are very few phone calls that you can make and say, ‘The last time we had a pandemic, what did you do?’

“You are learning and making decisions as you go,” she added. “Obviously, when you’re making decisions with the players’ safety as a priority and continuing to make decisions based on them as people first, students second and athletes third, then I feel we always have come out with the best decision possible, but it’s been tough.”

Santos Atkinson is the mother of two daughters, London, 4, and Madison, 16 months. She is grateful for her husband’s flexibility as well as Hofstra’s on-campus daycare, which she praised for its healthcare protocols.

Thanking her parents for the core values they instilled in her, Santos Atkinson said they equipped her to deal with adversity, stay grounded in her faith and work through any circumstance. Leading up to her job at Hofstra, she adeptly adapted to each new situation as an assistant coach at University of Pittsburgh, Florida State University, the University of Kentucky and Illinois State University.

“I coach to impact the lives of young women,” said Santos Atkinson. Some of the student-athletes have needed extra support as they’ve navigated having their classes online. She’s proud that the team as a whole achieved a GPA above 3.0 for the fall semester.

She knows the players are missing the social aspect of college. “We’ve asked them to sacrifice and remain in our team bubble,” said Santos Atkinson. “That’s not the collegiate experience you envision going into college or that you’ve had in past years. I’m appreciative of what they’ve done in making sure we stay healthy, but I know it’s tough.”