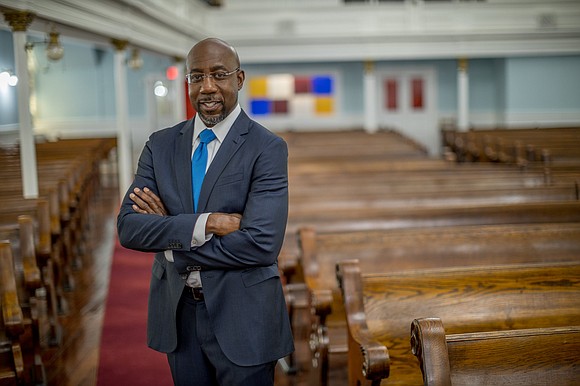 Early Wednesday morning was a glorious one for the Rev. Raphael Warnock. He was projected the winner in the senatorial runoff race in Georgia against Republican Sen. Kelly Loeffler. If the numbers hold, and Warnock has more than 50% of the vote or 2,230,231 to Loeffler’s 49% or 2,176,048 count, he will be the first African American senator from Georgia and the first Georgia Democrat elected in 20 years.

At press time Democrat Jon Ossoff leads his opponent David Perdue by 16,000 votes and has declared victory, which could mean that the Democrats have control of the Senate since at 50 senators apiece the deciding vote belongs to Vice-President-elect Kamala Harris.

It was a nip and tuck race and it wasn’t until the count came in from DeKalb County that Warnock and Ossoff apparently turned the tide.

“I am an iteration and an example of the American dream,” Warnock told reporters. “When I think about the arc of our history, what Georgia did last night is its own message in the midst of a moment in which so many people are trying to divide our country, at a time we can least afford to be divided.”

Warnock, the pastor at historic Ebenezer Baptist Church where Dr. King presided, will be the 11th African American senator. Before filling the pulpit at Ebenezer he was an assistant pastor at Abyssinian Baptist Church in Harlem.

Once again the Black vote, largely a result of the organizing of Stacey Abrams and other Black women in the state, proved decisive and as they did in the presidential race delivered another repudiation of Trump. He had been in Georgia to rally his troops but it proved as futile as his quest to reverse his loss.

Democrats now have their fingers crossed for Ossoff’s declaration to stand up, though a recount may be necessary given the closeness of the outcome.

Meanwhile, the Electoral College commands the airwaves, and the GOP naysayers of the Biden-Harris triumph should experience another setback since the numbers are not there to flip the script and make Trump the winner.