A look back at dance during COVID in 2020 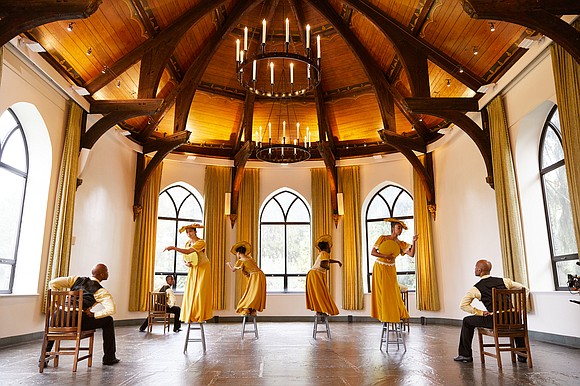 We all miss live theater. We all miss gathering in the lobby and the excitement of what to expect on the stage. For now, we’ve all been glued to the virtual proscenium––our various screens––but our universal aim is still to support artists, venues, and to keep our urgency for live dance performances at the forefront.

From March and well into the summer months of 2020 when it was deemed safe for us to gather outside, a flood of archival talks and outdoor events offered audiences some solace. Then the fall was upon us. We were all now indoors and our fall dance calendar for the stage could not happen! Performance venues began to think differently about presenting dance, and archival recordings started to pop up. And although at the top of each live or recorded event what we saw were empty lobbies, a theater with empty seats, and later, bows that happened without audible applause, we were ready.

Determined to keep audiences engaged, companies gathered in COVID-safe pods, living, and rehearsing together for weeks or months at a time so that our virtual prosceniums would be fresh. First, late in September, Britain’s Ballet Rambert, under Artistic Director Benoit Swan Pouffer, streamed the dramatic “Draw From Within” specially made for the screen by choreographer and filmmaker Wim Vandekeybus taking audiences on a virtual ride through all five floors of their studio building. Then in October the New York dance scene picked up, online. At Gibney, curated by Eva Yaa Asantewaa, Melanie Greene discussed and shared clips on “Sapphire” the gold-gilded, mysterious, and cunning character she has created, as part of the “Living Gallery” series. With hosts David Hallberg & Alicia Graf Mack, New York City Center’s annual “Fall For Dance” livestreamed two programs from the stage at City Center. Program One included Ballet Hispánico in Gustavo Ramírez Sansano’s fast-paced 18+1, Jamar Robert’s Morani/Mungu (Black Warrior/Black God) a musical solo 3 in three parts, where he responds to text that offers a definition of what “Black Is” bringing gestures to life when he runs, skitters, contracts, mourns when his fist makes contact with his chest, or when raised high above his head. More please! Natasha M. Diamond-Walker followed in a mesmerizing and precision-filled offering of “Lamentation” by Martha Graham. It’s hard to believe, but Diamond-Walker’s performance of “Lamentation” was the first by someone of African descent since it premiered in 1930. The evening ended with “The Two of Us” by Christopher Wheeldon for Sara Mearns and David Hallberg. The highlights of Program Two was tap dancer Dormeshia in “Lady Swings the Blues” and Calvin Royal III in Kyle Abraham’s to be seen. More of those too, please! Rounding out the program was Lar Lubovitch Dance Company guests’ Joseph Gordon and Adrian Danchig-Waring’s meditative reprisal of “Concerto Six Twenty-Two,” and Ashley Bouder, Tiler Peck, and Brittany Pollack in lively excerpts from George Balanchine’s “Who Cares?”

At the Joyce, their livestream called for seven dancers (Jared Brown, Lloyd Knight, Sara Mearns, Shamel Pitts, Annique Roberts, Cassandra Trenary and Michael Trusnovec) all from various named contemporary, modern and ballet companies to dance Molissa Fenley’s 1988 “State of Darkness” over two weekends. There was no time to be exhausted in Fenley’s 35 minute tour de force. Trusnovec was first and each followed with their own version in this mix of exact and relaxed display of technical prowess. They navigate complicated torso twists, their shoulders and heads move in opposing directions, plus they champion or give in to the demanding musical cues from Stravinsky’s “Rite of Spring.” Mearns was the last to perform, and at the end, and maybe by mistake, the curtain rise and we see her curled on the floor. Kudos to all!

The weather was still warm so at New York Live Arts passersby couldn’t help but to stop and take in Holly Bass’ “Moneymaker.” Poised just off the sidewalk in a large glass enclosure, decked out in a jumpsuit, giant heels, pompadour hairstyle and golden orbs that amplify her backside, Bass dances to a killer playlist for five hours nonstop. Urban Bush Women’s “Artist Journal” via Zoom closed out October. Led by the captivating co-Artistic Directors Samantha Speis and Judson, their heart-warming mix of performance, audience interaction, conversations on healing, remembering, time for fun, and a dance party, was soothing. “We are a community,” said Speis, toward the end, and Judson added, “to our dreams.”

In December, Raja Feather of The Feath3r Theory presented the documentary film “Any given Wednesday,” and then Kelly, as one of many pink-adorned beings in an over-stuffed glass-enclosure, guides us with text, music, and animation in “Hysteria.” Audiences could stop by, or watch via livestream. December also marked the first virtual season for the Alvin Ailey American Dance Theatre (AAADT). So much was new for the AAADT organization and during this uncertain time they created a full season of good. They said goodbye to longtime company members Glenn Allen Sims and Linda Celeste Sims in a farewell tribute, offered premieres including the large cast in “Testament” by Associate Artistic Director Matthew Rushing, with company member Clifton Brown, and former company member Yusha-Marie Sorzano, plus Jamar Roberts’ “A Jam Session for Troubling Times.” But they made sure to pay homage to an audience favorite, Mr. Ailey’s “Revelations.” There were many more online offerings, but the star of the season was the reimagined celebration of the timeless classic, “Revelations.”