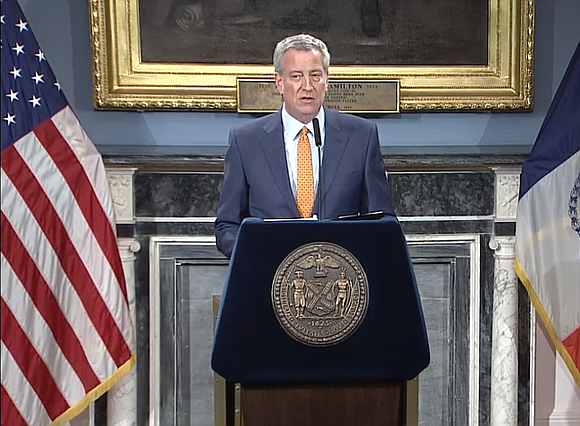 In late December, right before Christmas, the mayor announced his plans to add more experts to his situation room to assist in the city’s response to any positive COVID-19 test in the public school system.

Despite the criticism, de Blasio labeled the situation room a success and said that those who were skeptical about it are not fans of it.

“But I think the overall reality of the situation room has been, it has been very consistent, very effective,” the mayor continued. “If there are individual cases that weren’t handled well enough, we’re going to address that individually. And we’re also going to make sure if they need additional staffing, they get it.”

De Blasio’s situation room is designed to bring education leaders, public health experts and others to help assess as quickly as possible the origin of the positive test.

This leads to schools closing and all who work or attend being forced to quarantine for two weeks. Teachers have complained about being in the dark about what to do and how to do it for months and, according to the United Federation of Teachers, feel like they’ve been led astray. The “situation” regarding the city’s latest coronavirus plan for school has been met with confusion by many New York elected officials, parents and school principals.

And they’re not alone.

On Dec. 8, in a letter obtained by the Brooklyn Reporter, New York City Council Member Mark Treyger addressed de Blasio and Schools Chancellor Richard Carranza and told them to put together a plan that the public would understand. Treyger called out both men for the lack of transparency and the confusion that marred the beginning of the school year and established a consistent thread of issues with City Hall’s COVID-19 plan for schools.

He also called out the mayor for virtually talking out of both sides of his mouth when addressing mandatory testing.

“Local superintendents instructed principals that they cannot deny entry to any student if they didn’t have any consent forms,” he said. “There was a lot of confusion about what the testing plan actually is for schools. With the latest rollout with the new school reopening proposal, there still remains some confusion on what the testing plan is. They use the word ‘mandatory,’ but when you dig deeper there are still unanswered questions.”

“Some parents are asking if they can be present when their children get tested, at least the first time, and the response from the DOE was there’s issues in regard to social distancing,” said Treyger. “It is important to have an equal opportunity for all students for COVID-19 testing, but it is imperative that the city make appropriate accommodations for students that require them,” he continued.

Treyger also advocated for a plan making remote learning full-time during the pandemic. The same week of de Blasio’s announcement, he wrote on Twitter that one of Brooklyn school’s COVID testing results had taken a week to be obtained.

United Federation of Teachers President Michael Mulgrew said in a statement that the mayor needs to follow the state’s lead and close schools as soon as the testing rate hits that 9% plateau.

“It’s a real problem when the state and city use different measures to determine the rate of coronavirus infection,” said Mulgrew. “Given the fact that all the other communities in the state use the state methodology, New York City should adopt it also.

“Using that state measure, if the community infection rate in the city hits 9%, the safe thing to do is to close the schools, even if the in-school rate is lower,” continued Mulgrew. “Safety comes first—as shown by the fact that hundreds of our elementary schools and classrooms are closed temporarily every day because the virus has been detected. That is how we have stopped the spread of the virus inside our schools.”