New Black attractions to explore in 2021 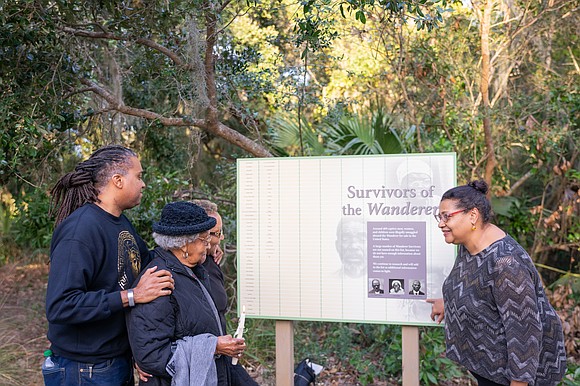 Celebrating Black history isn’t just something to be done in February. Every day is more like it. Our stories continue to be told. In fact, there are all sorts of new attractions that tell our truth opening this year.

Here are a few to put on your list when you’re ready to hit the go button again.

The Wanderer Memory Trail tells the story of the survivors of the Wanderer, the last known slave ship to land in Georgia and also one of the last known slave ships to arrive in the United States. Located on the southern end of this Georgia barrier island, the quarter-mile round trip, Wanderer Memory Trail is along the banks of the Jekyll River, near the point where the Wanderer illegally came ashore on Nov. 28, 1858 with more than 400 enslaved Africans on board. The new trail walks you through the story of Umwalla, a young African boy brought to America on that ship 160 years. Through a series of interactive exhibits along the trail, the pieces of Umwalla’s journey––from capture to freedom––are unveiled. The slave ship Wanderer originally was built as a stately and swift luxury yacht, which helped disguise its secret, illegal transport of enslaved Africans from West Africa to America.

Nashville is music city. Leave it to them to open the only museum dedicated entirely to preserving African American music traditions and celebrating the influence African Americans have had on music. In January, the National Museum of African American Music opened. The 56,000 square-feet museum is comprised of seven galleries with artifacts, memorabilia and state-of-the-art technology designed to share a different narrative and a unique perspective on African American music and history. Start your journey in the Roots Theater then move through the remaining galleries which give an in-depth look at more than 50 genres and subgenres of music. You’ll experience everything from call-and-response spirituals and work songs from the 1600s to the soulful sounds of saxophones, trumpets, and snares during the heyday of jazz in the 1900s.

The museum is set to open in May. The goal, says founder Lamont Collins, is to tell the story of the African American journey from Africa to all ports between. Expect exhibits, programs and an array of activities to illustrate Black history, culture and art. Roots 101 will showcase local and national artifacts.

Also new at the Kentucky Derby Museum in Louisville is the 90-minute African Americans in Thoroughbred Racing Tour on Saturday afternoon. From slavery until today, hear about the impact Blacks have had on horse racing with stops at hotspots like Churchill Downs.

New York is lovely in the spring and there’s something new to put on your to-do list. On Site Opera’s “The Road We Came,” a new opera- and song-based project explores the composers, musicians and places that define the rich Black history of New York City through a series of self-guided, musical walking tours. Celebrating a collection of never recorded and seemingly lost classical compositions by Black composers, “The Road We Came” will use filmed musical performances and spoken narration to connect you to the musical timeline of Harlem, Midtown/Hell’s Kitchen and lower Manhattan. From the home and texts of the prolific poet Langston Hughes, to Lincoln Center, to the African Burial Ground National Monument, and beyond, “The Road We Came” opens windows to the past and shines a light on the present. “The Road We Came” is a multi-media collaboration between On Site Opera, Ryan & Tonya McKinny’s Keep the Music Going Productions, award-winning biographer and Harlem historian Eric K. Washington, and critically acclaimed baritone Kenneth Overton, the featured soloist of the tours. Each self-guided hour-long tour is an immersive musical experience that you access via a walking tour app and do at your own pace. With the app you can experience the tour in person and virtually.

Disney likes to do things big. It recently unveiled its new exhibit, “The Soul of Jazz: An American Adventure” inside EPCOT at Walt Disney World Resort. Musician Joe Gardner, musician, mentor and teacher from the Disney and Pixar film “Soul” shares the rich and inspiring surprises in the stories of jazz from places like New Orleans, Chicago, New York City, Los Angeles and San Juan, Puerto Rico. Relish relics like Louis Armstrong’s Selmer trumpet, the sheet music of Duke Ellington and drummer Louie Bellson, the cornet of Bix Beiderbecke, an early jazz soloist from the 1920, sheet music handwritten by Jelly Roll Morton and more.

This new trip with Outdoor Afro and Backroads takes you on a Black history journey via hiking/walking, biking and kayaking. Take guided walks highlighting the history of the people in Savannah and Charleston, learn about the Gullah culture through storytelling and song at a Lowcountry boil. You visit PennCenter, one of the first schools for formerly enslaved people, paddle the waterways of the ACE Basin, once home to rice plantations and the marshy channels of the Combahee River where Harriet Tubman guided a regiment of Union soldiers. You’ll also visit the Magnolia Plantation and hear the stories of Black folk from slavery to the Civil Rights Movement. A portion of every trip sold will go to charities helping Black youth in Georgia and South Carolina access the outdoors. The tour, Oct. 3-7, starts in Savannah and either ends in Charleston or Savannah.

The Chesapeake African American Heritage Trail includes a self-guided driving tour with multiple sites of interest, and a companion podcast. Episodes feature powerful commentary from local historians, artists, and residents. Take in the war stories and accounts of heroism in the Revolutionary War, Civil War and the Underground Railroad. See sites like Cuffeytown, a historic community formed by free Blacks that can be traced to the 1700s and Cornland School, a school for African American children shortly after emancipation.

The historic Bronzeville neighborhood is where you’ll find America’s Black Holocaust Museum later this year. The museum that opened in 1984 by Dr. James Cameron, a survivor of a lynching, ran it until his death in 2006. The museum closed in 2008 due to the Great Recession. Recent funding from community organizations and leaders helped to bring to life the new museum. The History Galleries will tell the little-known stories from pre-captivity to the present day along with special exhibits. Another highlight is the Memorial to Victims of Lynching that will feature their life stories, say their names and note where and when thousands of men, women and children were terrorized and murdered.

Later this spring look forward to the opening of Greenwood Rising. This year marks the 100th anniversary of the Tulsa Race Massacre, also known as the Greenwood Massacre, the deadliest and most destructive massacre in the United States’ history. In 2021, a state of art learning center and museum, Greenwood Rising, opens to display Tulsa’s turbulent Black history in a positive and constructive way to honor the legacy of Black Wall Street before and after the Tulsa Race Massacre of 1921.

You have two more reasons to visit Beaufort. The Harriet Tubman Monument is a 14-foot bronze and granite sculpture by American sculptor, Ed Dwight, which is expected to be completed this year. It will sit next to the 156-year-old Tabernacle Baptist Church, which is also the burial place of Robert Smalls, an enslaved man who commandeered a ship to freedom and was later a U.S. Congressman. Then there’s the Gullah Cultural Center located on St. Helena Island. It will serve as an educational and cultural center for all things Gullah. Think: books, artwork and tours and history. It is right across the street from The Gullah Grub Restaurant where you can enjoy authentic cuisine.