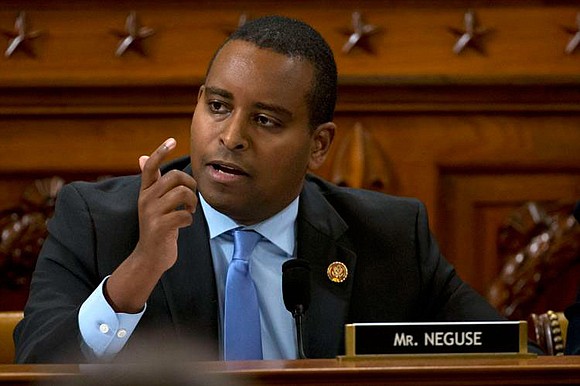 Colorado Congressman Joe Neguse, one of the standout speakers at the impeachment trial of ex-president Donald J. Trump, got raves from news pundits, saying a new national political star had been born.

He credits his parents with the values that propelled him into a career in politics.

“Over 35 years ago, my parents came to the United States from a small country in East Africa…as immigrants to a country that welcomed them with open arms and tremendous opportunities,” Neguse said in his first electoral victory speech.

“I’m not a typical candidate,” Neguse said in a video that ran during his campaign for the congressional seat. “As the son of immigrants, as the son of refugees who came to this country, I firmly believe that we are a country rooted in the values of empathy and compassion for people who are coming to the United States to rebuild their shattered lives.”

Neguse’s father, Debesai Neguse, fled Eritrea in 1980, seeking asylum in America. His wife, Azeib, joined him a year later, and together they rebuilt their lives, 12,000 kilometers from home.

When they left Eritrea, in East Africa, a decades-long war for independence from neighboring Ethiopia had devastated the country. The conflict took tens of thousands of lives, depleted the economy and placed the entire nation, and its 6 million people, on a war footing. A U.S. travel advisory issued Jan. 25, 2021, warns of COVID-19, limited consular assistance and landmines. Neguse, a Democrat, ran in Colorado’s second district and represents about 720,000 Coloradans in a district that covers about 10 counties. Neguse raised more than $1.2 million for his campaign, compared to the Republican Peter Yu’s roughly $66,000.

His victory at 34 made him one of the youngest members of the 116th U.S. Congress. He’s also a new father. In August 2018, his wife, Andrea, gave birth to their first child, Natalie.

“While our campaign may be over, our real work has only just begun,” Neguse said in his victory speech. “We are living in trying times, which demands the very best of ourselves in order to combat the toxicity and the vitriol and the strife so common today.”

Neguse, born in Bakersfield, California, was a Regent of the University of Colorado from 2008 to 2015, and co-founder of New Era Colorado, an advocacy organization for young voters. The issues he’s identified as top priorities: protecting the environment, universal health care, a woman’s right to choose and immigration reform.

With his election in Colorado, he became the state’s first Black congressman and the first Eritrean-American representative in the U.S.