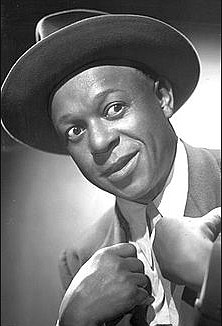 Last week we featured actress Gertrude Howard in the column and she had an amusing male counterpart in the early Hollywood years—Eddie “Rochester” Anderson. There is no indication in their film legacies that they were ever in the same film, though both had uncredited roles in different productions of “Show Boat”—Howard in 1929 and Anderson in 1936. In fact, Howard’s career was coming to an end as Anderson’s was just beginning to bloom.

Born Edmund Lincoln Anderson on Sept. 18, 1905 in Oakland, California, he was better known as Rochester, where he functioned in a number of capacities with Jack Benny, in films and especially on television. Like so many aspiring African American performers of the day, he got his start as a teenager on the vaudeville circuit.

Both his parents were entertainers—his father “Big Ed” Anderson performed in minstrel groups and his mother, Ella Mae, was a tightrope walker whose career was cut short after a disastrous fall. Eddie often said his family roots could be traced back to slavery and that they had left the South via the famed Underground Railroad. Eventually, his family settled in Oakland, California where during his childhood he helped the family earnings by running errands.

When he wasn’t hustling outside arenas and stages where his parents performed, Anderson was on horseback with dreams of being a jockey but that came to an end with his increase in weight. After he won a vaudeville contest he was soon seduced by the theater and by the early twenties he and his brother, Cornelius, were performers in a variety of productions. But he found his métier as a comedian and in this capacity he traveled across the U.S. even meeting Benny as early 1926 on the East Coast. His gravelly voice was among the things that singled him out from other comedians, a condition brought on while he was youngster hawking papers and trying to out yell and outsell his competition.

The experience in vaudeville prepared him for his debut in films after relocating to Los Angeles in the early 1930s. From 1932 to 1936, Anderson made a number of films, working mainly as a butler, waiter, bellhop, chauffeur and as other servants. Along with his presence, however, obsequious in films, Anderson gained popularity in the mock elections for the “Mayor of Central Avenue,” the main thoroughfare in Los Angeles. Such buffoonery only added to his reputation as an entertainer, particularly in films and a featured role in “The Green Pastures” (1936) and “Cabin in the Sky” (1943). But his prominence soared after his appearance on “The Jack Benny Program,” a radio show on March 28, 1937. Several fortuitous events gave Anderson the audition win to be the porter in a train skit. It was planned as a one-time sketch but earned Anderson a long-term contract.

The humorous exchange between Anderson and Benny would be a staple of succeeding shows with Anderson being repeatedly called to portray a different servant or the “colored fellow” Benny so admired. So rewarding were the routines that Anderson soon had a permanent spot on the show as Benny’s valet and butler, the first time an African American had a regular role on nationwide radio. By 1950, the series moved to CBS television and Anderson continued in his role until the series ended in 1965.

For all the popularity gleaned from his regular appearances with Benny, it was Anderson’s role in films that are most memorable, particularly as Little Joe in “Cabin in the Sky” as Ethel Waters’ husband and the fancied suitor of the voluptuous singer Lena Horne. The dream sequence and the vocal numbers by Waters and Horne are remarkable interludes but Anderson’s portrayal through all the imaginative moments is the film’s chief ingredient. As in the radio skits with Benny, stereotypes abounded whenever Anderson was handed a script. But after World War II and the emerging Civil Rights Movement, Benny became more sensitive and aware of any denigrating characterizations harmful to Anderson.

Over time Anderson accumulated considerable wealth and invested wisely becoming one of the most highly paid entertainers of his day, Black or white. In 1962, Ebony magazine listed him among the 100 wealthiest African Americans. In fact, he was so well-off that he had enough money to hire his own valet. Some of his wealth was accrued from his business acumen that began with his ownership of a parachute company during World War II. He also managed Billy Metcalfe, a boxer in the 1940s.

One of his last philanthropic gestures was the willing of his huge home to assist those struggling with drug abuse. This became the Rochester House and key component of the subsequent Eddie “Rochester” Anderson Foundation, established by his son, Eddie Anderson, Jr.

Anderson had a star placed in his honor on the Hollywood Walk of Fame for his monumental contribution to radio and he was posthumously inducted into the Radio Hall of Fame.