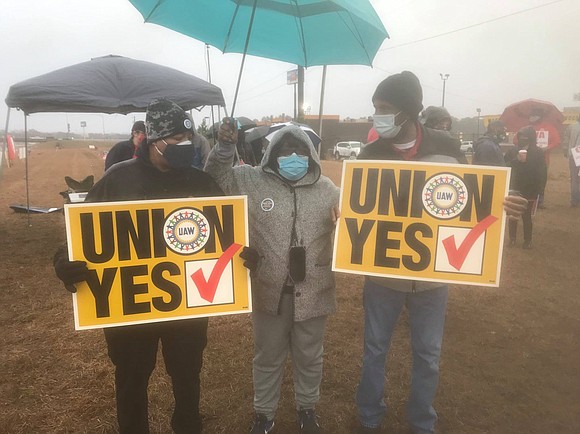 Workers at an Amazon warehouse in Alabama are looking to make history and organize against the online retail giant. Employees in a wish fulfillment center in Bessemer, Ala. have organized and want their collective voices heard. Ballots were sent out to workers on Monday with the hope of the majority saying yes to unionizing.

It’s been months in the making.

On Jan. 21, 2021, Amazon made a motion to request a stay of the union election for workers at the fulfillment center and appealed the decision by the National Labor Relations Board Region 10. This week, the NLRB denied both motions which allowed the union, according to Retail Wholesale and Department Store Union officials, to “proceed as decided in the Decision and Direction of Election by their Region 10 office on Jan. 15, 2021.”

At the Alabama-based fulfillment center, workers have complained about the company counting any time spent using the restroom or stretching as “time off task” (TOT), the company tracking how many packages each individual worker scans through, and the policy that after a half hour of TOT, workers get an automated write-up. After two hours, they’re fired.

When asked to comment on the workers organizing, Amazon spokesperson Heather Knox said that the company already provides what the union desires.

“We opened this site in March and since that time have created more than 5,000 full-time jobs in Bessemer, with starting pay of $15.30 per hour, including full health care, vision and dental insurance, 50% 401(K) match from the first day on the job in safe, innovative, inclusive environments, with training, continuing education and long-term career growth,” said Knox. “We work hard to support our teams and more than 90% of associates at our Bessemer site say they would recommend Amazon as a good place to work to their friends.”

Workers complained about doing their job in extreme heat and about managers regularly changing up the schedule and if the employee didn’t notice, they were fired. This doesn’t include the 218 workers who tested positive or were thought to have COVID, but kept working.

Stuart Appelbaum, president of the Retail, Wholesale and Department Store Union, the union assisting and conducting the organizing, said that this is another chapter of Amazon employees rising up against what they believe to be unfair practices.

“Once again Amazon workers have won another fight in their effort to win a union voice,” stated Appelbaum. “Amazon’s blatant disregard for the health and safety of its own workforce was demonstrated yet again by its insistence for an in-person election in the middle of the pandemic.”

Amazon underwent an anti-union campaign in December using the internet to warn workers about having to pay dues as demonstrated with the website #DoItWithoutDues stating that there are “no free trials” for joining unions. Workers also talked about being pulled aside and brought together for meetings with people, who didn’t work at the warehouse, trying to pursue them into not organizing.

RWDSU and the powers at Amazon have different opinions when it comes to what the other provides.

“Today’s decision proves that it’s long past time that Amazon start respecting its own employees, and allow them to cast their votes without intimidation and interference,” Appelbaum said.

“We don’t believe the RWDSU represents the majority of our employees’ views,” Knox stated. Our employees choose to work at Amazon because we offer some of the best jobs available everywhere we hire, and we encourage anyone to compare our total compensation package, health benefits, and workplace environment to any other company with similar jobs.”