Actress Gertrude Howard, whose potential was limited in Hollywood 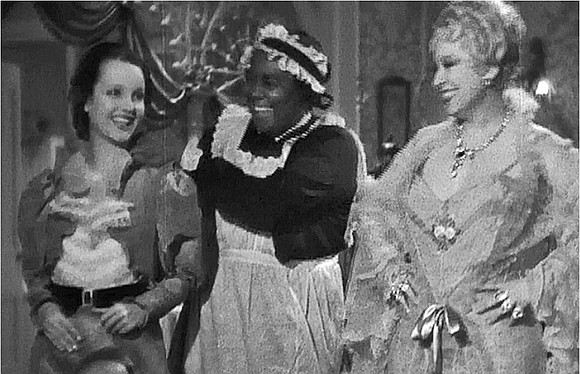 Gertrude Howard, center, with Mae West to her left

Recently Turner Classic Movies (TCM) devoted several days to films featuring Mae West. One of her lines, “Peel me a grape,” which she wrote, as she did in many of her films, was a demand delivered to her maid, Beulah. With her typical unruffled manner, Beulah, portrayed by Gertrude Howard, heard the command as she was leaving the room and thus gave no response.

Their relationship was basically one of servant and mistress and Howard would have a career of such domestic, minor, and often demeaning roles, but she soldiered on.

She was born Oct. 13, 1892 in Hot Springs, Arkansas, and little else is known of her early years before she began appearing in silent films in the 1920s. Howard first appearances as an entertainer occurred in 1921 or 1922 when she was in the chorus of “The Wife Hunters.” There is some discrepancy about when she actually began working in films, though “The Circus Cyclone” in 1925 is often cited as her debut.

Two years later she portrayed the wife of Uncle Tom in “Uncle Tom’s Cabin,” a film based on Harriet Beecher Stowe’s book. Then came a parade of Mammy, Auntie, Queenie, and Emmy roles, none of them providing the commanding acting abilities she possessed. Even so, according to an article in the Pittsburgh Courier, she was the highest paid Black actress in Hollywood. She had exemplified Hattie McDaniel’s famous dictum that she would rather play a maid than actually be one.

She was uncredited—not an unusual designation—in the musical film “Show Boat” as Queenie in 1929 with comedic great Stepin Fetchit as her husband Joe. A decade later their roles would be reprised with greater substance by Hattie McDaniel and Paul Robeson. It was in this film that Robeson sang “Ole Man River” whose lyrics he would later revise to remove the denigration.

Howard’s role in “Hearts in Dixie” in 1929 she was at least credited and featured along with Clarence Muse. Fetchit was again with her repeating his meandering behavior. She never had more than a few speaking lines in these films, but that changed when she and other Black maids surrounded Mae West as though she was Cleopatra. As Beulah, Howard was the maid in charge and had several scenes with West where they exchanged some sharp repartee, concluding with the command by West that Beulah peel her a grape. When Howard died in 1934 at the age of 41, West helped to raise funds for her funeral.

Interestingly, just as Howard’s film days were coming to a close, another Black actress of a similar comportment, Louise Beavers was getting considerable notice, particularly from her sterling performance in “Imitation of Life” the same year of Howard’s death. Later in radio productions Beavers would renew Howard’s Beulah with even greater celebrity. In effect, Howard had paved the way for Beavers, McDaniel and, to some extent, Ethel Waters. Howard’s image of the overweight maid was Hollywood’s conception of Black women and it would take decades, especially after the arrival of Cicely Tyson, to present a more admirable depiction.

Before her death on Septe. 30, 1934 in Los Angeles, Howard made three films: she was uncredited in George White’s “Scandals;” was Martha the maid in Peck’s “Bad Boy;” and she had a small part in “Carolina.” In her short career Howard was in more than 20 films.