It took long enough: Cuomo’s budget arrives (not) on time 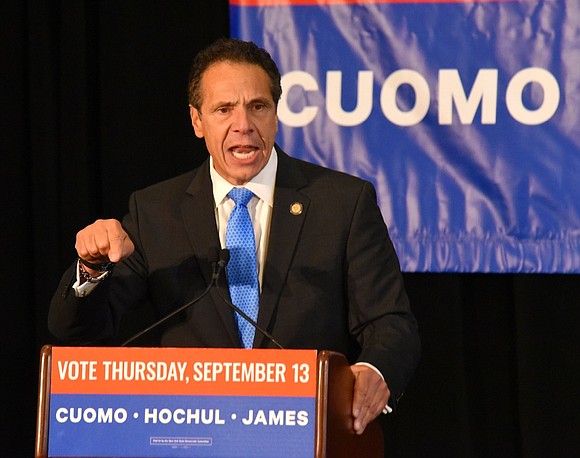 New York State Gov. Andrew Cuomo’s new $212 billion budget increases taxes on the wealthy, provides aid for those excluded from collecting unemployment and the stimulus, creates a fund for undocumented workers who didn’t receive financial assistance since the global pandemic shut down New York, provides $350 million in transportation infrastructure investments, and increases the state’s aid to school districts by $3 billion (from $26.5 billion to $29.5 billion). The budget also puts a three-year freeze on tuition for the State University of New York (SUNY) and the City University of New York (CUNY).

Before the agreement, Cuomo told reporters on Tuesday that the budget is “going to be the biggest and the best action plan for the state of New York ever. We’re not just going to rebuild New York. This has to be a time when you reimagine New York, where you learn from the lessons of COVID.”

With the policy providing finances to undocumented and excluded workers ($2.1 billion), immigrant activists are singing the praises of the state legislature. But they’re holding their breath as to how it will manifest.

“We are very happy about the approval of this fund for economic relief for excluded workers in New York,” said Luis Cortes of Coalition for Immigrant Freedom. “Unfortunately, we know in advance that it will not reach enough people and that many members of our community may not access it. What we hope is that the application process be expedited and set up as soon as possible. It is an emergency and this was very clear for the hunger strikers in NYC and Westchester, who are our heroes in this campaign.”

“Our immigrant community celebrates for the first time that the voices of essential and excluded workers were heard and taken into account for economic relief,” added Jackie Agudelo of the United Community Center of Westchester. “There had to be a global pandemic and hunger strike for them to be taken into account during this immense crisis. Now we hope that the funds will be distributed as quickly as possible.”

The budget also expands postpartum coverage for women on Medicaid (60 days to a year) and restores the $415 million that purportedly would be cut from Medicaid.

The budget also includes an Early Retirement Incentive that only applies to New York City employees that earned the approval of one union leader.

“The brothers and sisters that make up District Council 37 are the unsung heroes of New York City,” stated DC 37 Executive Director Henry Garrido. “This last year, while many worked comfortably from home, DC 37 members kept the hospitals clean, watched your children in day care, and ensured the parks were safe so that New Yorkers could socialize outdoors. Many have kept this city running for decades. After their tireless dedication and round-the-clock essential services, it is not only fair, but also just, that they be allowed to retire early rather than face potential layoffs.”

Other elements of the budget include $1 billion in relief to small business, which includes grant funding for businesses impacted by the pandemic.

“Over the past six weeks, we’ve come together to use our voices to advocate for small businesses across New York,” said Azra Khalfan-Kermali, owner of Plaques by Azra in Queens and member of the 10,000 Small Businesses Voices community. “The state legislators heard us and reached a budget agreement that prioritizes small businesses. This budget sends a clear message: small businesses are the engine of the economic recovery and for New York to win big again, we must start small.”

Cuomo’s budget also includes $40 million for non-profit arts institutions and sets aside $25 million for Nourish NY, an initiative that acts as a lifeline for families and farmers who’ve struggled since the pandemic began.

“The only thing this budget accomplishes is the accelerated decline of our state,” stated Langworthy. “It’s a $212 billion dollar tax-and-spend boondoggle that will push New York’s mass exodus to the point of no return. This budget makes clear that the only way to save New York is to elect a Republican governor who will stand up to this madness and return common sense to state government.”

“In one of the wealthiest places in the world, with more billionaires than any other state in the nation, my neighbors are dying from lack of access to basic necessities,” said Brisport, whose district includes Red Hook and Bedford-Stuyvesant. “This is the single most unequal state in the nation, and it is quite literally killing us.” Brisport acknowledged that the budget raises income taxes on the wealthy by $2.75 billion in 2021.

“Jeff Bezos earns that much every 29 days,” Brisport stated.

No matter the news, good or bad, New York City Public Advocate Jumaane Williams wants elected officials to delay patting themselves on the back so quickly. He concluded that this budget should be part of a multi-year, multi-part plan to bring the state back in shape.

“This is a recovery budget, but the recovery from this pandemic, and the underlying crises that predated it, will take years,” stated Williams. “This budget cannot be a one-time document. It must be the start of a governing principle, one that is committed to addressing injustices and inequities, that recognizes the way forward is not austerity but investment, that embodies the courage and competence we need to renew New York. One that I will continue to fight for.”