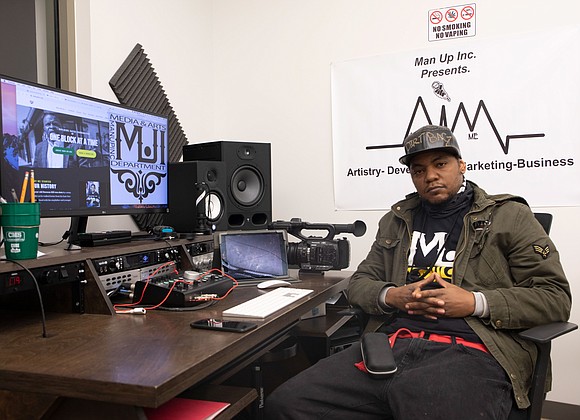 Naquan Kareem, while wearing the hat of an educator and an instructor, is the program manager for the media and arts department at ManUp Inc. For the last six years, Kareem has had a sense of fulfillment with this job.

ManUp Inc. is a company in East New York that has eight pillars of support. Their first and foremost mission is to create a safe community and call out the violence that happens within the Black community. Besides the media and arts program, some of the other pillars that ManUp Inc has is a job development department, a fatherhood initiative that deals with young boys and the boys club that teach them ethics, and a community pillar.

Kareem, though he’s had many jobs, mentions that this is the first job that he has had that felt like a job.

“I’ve had plenty of jobs in my life from working at Popeyes to working at the Nordstrom Warehouse. I even worked at the post office,” says Kareem. “This was the first job I’ve ever had that I really don’t feel like I’m getting up to go to work.”

“I’m working in the neighborhood I grew up in, so I get to interact with the people, and most of them are people I already know,” says Kareem. “It’s a really good feeling.”

Kareem mentions that his work atmosphere feels like a family, and this goes beyond just addressing his coworkers and the people at ManUp Inc. as brother and sister. As a child, Kareem grew up with the founder of ManUp Inc., Andre Mitchell. This is the same individual that offered Kareem a job.

Ten years after Kareem moved back to Brooklyn after living down south, Kareem found himself at ManUp Inc., which he found was already established. When Andre Mitchell visited down south, he was able to see what Kareem was skilled in and what he loved to do. At the time, Kareem had his own business, The House or Music and Entertainment, but it wasn’t as established as ManUp Inc. became.

Kareem recalls Mitchell approaching him with the idea of creating a program that he wanted to start at ManUp Inc. He wanted to build off Kareem’s program, A.I.M which stands for Artist in Me.

“I updated the curriculum where we focus on videography, performing arts, and sonic arts, which is like music production.”

When asked how children can learn by using this type of medium and why it is important, Kareem stated that this is one of the greatest teaching tools that children can have as far as music and arts.

“I believe that it teaches [children] how to express themselves in an artistic way,” says Kareem. “Of course, we focus on rappers and singers, but we also focus on producers and graphic artists.”

Kareem would also love to do cinematography and photography. He believes that it’s about giving children access to materials that allow them to express themselves artistically. Kareem mentions that ManUp Inc. is about academics and paperwork, but it is mostly a hands-on program because they bring keyboards, mics, and cameras.

While the children may be having fun while they are participating in the program, they are also learning how to count music, the different frame rates of a camera, and how to operate cameras.

Being that Kareem grew up in East New York, and went to school in this area, he is able to talk with the kids he teaches in a better way than someone else who didn’t grow up from there. He’s teaching in the same schools he graduated from.

“I can talk to [the kids] as one of them and say, ‘You know, I was here, I went to this school, but there wasn’t anyone like me for me.’”

Kareem mentioned that if there was anyone like him teaching his younger self when he was in school, he would probably be further in his career and life.

While ManUp Inc. has made its mark in places like East New York, Brownsville, Bedford Stuyvesant and Crown Heights, they are planning to spread throughout Brooklyn and the United States. However, Kareem has made his mark in Brooklyn.

Kareem always felt like he was alone with thinking that Black Americans need help from their people. He mentioned that people thought of him as the angry Black man.

Kareem goes on to say it was never about the money he was making, and his job gives him a sense of fulfillment and gives him a chance to call everyone else out who doesn’t seem to be doing anything for their community or their people.

“This also gives me a chance to call everyone else out. ‘Like I’m doing this for our people, what are you doing?’”