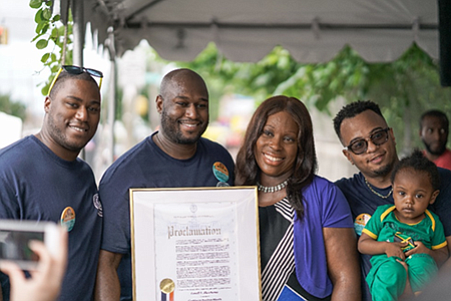 The United Federation of Teachers has decided that a council member is the one to lead the Bronx.

According to UFT officials, Gibson has devoted much of her recent time to fighting on behalf of the working class and low-income people of color.

“During my time in the City Council, I have always advocated for our educators, administrators, students and families with over $30 million in capital needs to our local schools for technology, building upgrades and new investments,” stated Gibson. “I am proud of our work together fighting to restore Fair Student Funding, Single Shepherds, Community Schools and recognize the important need to address the digital divide, reducing classroom size, and providing holistic services, trauma-informed care, restorative justice and wraparound programs for our students and families.”

UFT officials said that her campaign for borough president has drilled the messages of recovering from the COVID-19 pandemic, bringing new jobs and opportunities to the Bronx, and losing Bronx’s reputation as being the least healthy county in New York State.

“Vanessa L. Gibson is a fighter who has proven her commitment to our schools and communities. She will bring this same fire and passion to the role of Bronx borough president and make sure the Bronx not only recovers from the pandemic but comes back stronger than ever,” stated United Federation of Teachers President Michael Mulgrew.

Gibson has given out a few endorsements herself. Last week, she endorsed current Brooklyn Borough President Eric Adams for New York City mayor. Also last week, Gibson joined the Professional Staff Congress (PSC-CUNY), the union representing CUNY faculty and staff, at Hostos Community College calling for a CUNY New Deal that would add more faculty, make tuition free, delegate more funds to the university system and enhance the college experience for its student body, which is made up of mostly woman and people of color.

In an email endorsing Gibson for borough president, Public Advocate Jumaane Williams cited the benefit of having more women in political leadership. Especially women of color.

“We need to continue elevating strong Black women leaders as we work towards an equitable recovery from the pandemic,” said Williams. “Vanessa is the best candidate in the Bronx borough president’s race to address disparities that have been exacerbated by the pandemic, including access to health care, being food secure, and staying in an affordable home.”