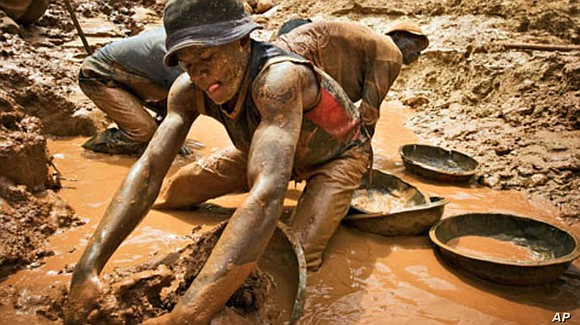 Some 50 villagers hired to dig for gold in the eastern Democratic Republic of Congo died this week when their mine entrance was blocked and the mine flooded due to torrential rains, it was widely reported.

The accident in the makeshift mine occurred Friday in the town of Kamituga in South Kivu province, about 170 miles southwest of the regional capital Bukavu.

Videos on social media showed hundreds of people attempting to clear the rubble blocking the entrance of the mine, with some rescuers using shovels or their hands to move debris. In one video produced by the Agence France-Presse news agency, bodies are shown being extracted from the mine with a warning reading: “CONTENT WARNING: DEATH.”

Local officials say most of those feared dead are young people, including women, and they have called for two days of mourning.

“Investigations must be carried out to find out the causes of this disaster,” said “Nic” Kyalangalilwa, pastor of Lephare Church in Bukavu and a coordinator of the Congo Leadership Institute, a development charity with headquarters in Orchard Park, NY, and a member of the City to City Africa advisory board, an affiliate of Redeemer City to City, based in New York City.

“The authorities must take responsibility instead of taxing” these miners, Kyalangalilwa said.

Because many unregulated mines are in remote areas, the accidents are under-reported.

The subsistence mineworkers sell what they find to local traders who sell it on to large foreign companies and are usually paid a pittance.

Canadian mining company Banro, with a controversial gold mine in the area, has denied any connection to the disaster.

Mining hardly benefits the DRC’s more than 80 million people. The World Bank said in 2018 that 72% of the population lived on less than $1.90 a day and more than 20% of the country’s mining revenue is lost due to corruption and mismanagement, an activist group says.

Meanwhile, a new company in the DRC appears to be a joint venture between the Frontier Services Group, led by Erik Prince, founder of the private military company Blackwater USA, now called Academi, and one of the former Congolese president’s alleged middlemen and an alleged gold smuggler.

“This represents an extraordinary coalescing of powerful interests in a single company at a time when DRC is grappling with its first peaceful transition of power in 60 years,” writes Global Witness, a human rights and environmental activist organization.