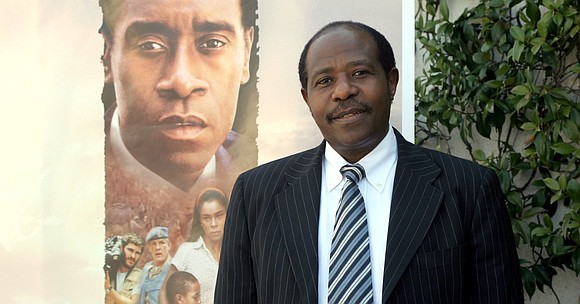 “I’m ready to face terror charges against me,” declared ‘Hotel Rwanda’ hero Paul Rusesabagina this week from a cell at the Metropolitan Police Station in Kigali, Rwanda.

Rusesabagina, who faces terror, murder and arson charges, said he is now choosing his defense team to prove his innocence.

Best known for the story of how he saved 1,268 people during the 1994 genocide in Rwanda, Rusesabagina vanished after reaching Dubai following a flight last week from Chicago. Days later he re-emerged, wearing handcuffs, in the Rwandan capital, Kigali.

Rwandan President Paul Kagame, breaking his silence on the dramatic arrest of a prominent dissident, maintains that his government had not forced Rusesabagina to return from exile to face charges of terrorism and murder but hinted that he might have been tricked into returning.

“There was no kidnap,” Kagame said during a live television call-in on state television. “He got here on the basis of what he believed and wanted to do,” The New York Times reported.

Rusesabagina’s family insists he would never have voluntarily returned to Rwanda and has accused the Kagame government of kidnapping him from Dubai. They are demanding to know more about the circumstances of his transfer.

Kagame’s government has been trying for at least a decade to apprehend Rusesabagina, 66, who was catapulted to fame by the 2004 movie, in which he was played by the actor Don Cheadle.

His actions were also captured in the 1998 book, “We Wish to Inform You that Tomorrow We Will be Killed With Our Families,” by American journalist and author Philip Gourevitch.

Authorities said he was arrested on an international warrant with the cooperation of other countries.

The charges he now faces center on his leadership of the Rwanda Movement for Democratic Change, an opposition coalition whose armed wing, the National Liberation Front, has been accused of carrying out attacks in Rwanda.

Rusesabagina is a Belgian citizen and an American permanent resident. He has not been granted any consular visits, a family representative told The Times.

On Sunday Kagame doubled down on his assault on Rusesabagina’s reputation, saying that other survivors from the Hotel Milles Collines dispute his depiction as a hero. Previously, Rwandan officials have dismissed “Hotel Rwanda” as “pure fiction” and accused Rusesabagina of “propagating lies and misinformation” about the genocide.