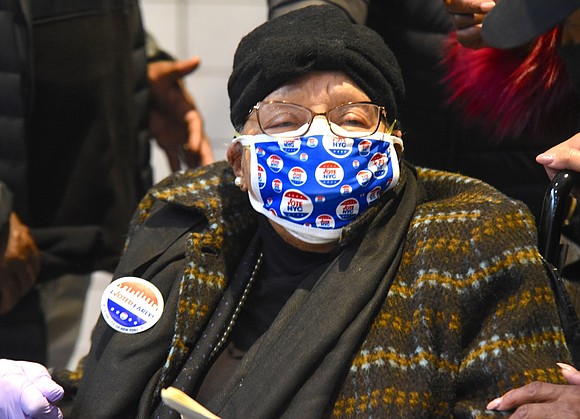 PICTURED: HCCI and The Honorable Judge Milton Tingling, NY County Clerk, announced that Dr. Thelma C. Davidson-Adair, who is 100 years old, was voting in person on Sunday, November 1, 2020, at her polling site is the Jackie Robinson Complex 106th Street, located in Harlem USA.  Dr. Thelma Adair was first Black woman to be elected moderator of the United Presbyterian Church in the United States, the highest elected official of the Presbyterians in U.S.A -- Adair was the moderator of 188th General Assembly.

As of Wednesday, Oct. 28, a record 66 million Americans have voted in the 2020 General Election including over 457,000 people in New York City. However, as New York participates in the nine days of early voting for the first time in a U.S. presidential election, problems have arisen and adjustments are being made.

Early voting kicked off in New York City on Saturday, Oct. 24 with over 90,000 people casting their ballots at the city’s nearly 90 Early Voting Sites across the city. Brooklyn is leading the way with nearly 150,000 votes cast. The heavily Republican borough of Staten Island has had the least amount of early votes cast at just over 45,500.

Within days after early voting began complaints of long lines accompanied by unpleasant weather made it difficult for many to cast their ballot. Some had to wait as long as two hours to vote including Mayor Bill de Blasio who said he had to wait three and a half hours on Tuesday, Oct. 27, to cast his ballot in Brooklyn.

Speaking at a press briefing this week, de Blasio said the Board of Elections (BOE) wasn’t prepared for the record breaking turnout.

“We need this to be a better experience,” de Blasio said. “You know, long lines tell people to go home––that’s just the reality. Long lines at a poll site discourage voting, they don’t encourage it. And we’ve worked so hard over these last years to make voting and make the democratic process better, to make it more accessible, to make it clearer. We cannot at this crucial moment see people discouraged.”

The mayor called on the BOE to increase the number of voting machines and staff at Early Voting Sites. He suggested that bringing out voting machines not in use and reserved for Election Day be brought out. He also called for extended voting hours.

Gov. Andrew Cuomo also criticized the BOE for the long waits with early voting so far and called for a revamping.

Watchdog groups are also joining the chorus of critics. During a tele-press conference call held this week by the Lawyers’ Committee for Civil Rights Under Law and members of its Election Protection coalition, the groups are monitoring conditions voters are facing in New York.

“Voters in New York and across the nation face significant and unprecedented challenges as they cast their ballots this election season. We are concerned for low-income voters, immune compromised and elderly voters who are encountering new barriers as they make their plans to vote,” said Kristen Clarke, president and executive director of the Lawyers’ Committee for Civil Rights Under Law. “It is critical that New York City do more to address the long lines, the repeated mistaken ballots sent to voters, and any law enforcement electioneering at the polls.”

Perry Grossman, senior staff attorney with the New York Civil Liberties Union’s Voting Rights Project, said while long lines are a sign of voter enthusiasm, they are also a signal of voter suppression.

“We want to make sure that poll sites are providing accommodations to elderly or disabled voters who may have difficulty standing in long lines,” Grossman said. “We’re also paying close attention to law enforcement conduct in this election and around the polls in particular to ensure that voters and voter assistance groups are being treated with the courtesy and respect to which they are entitled. Bad experiences at the polls can deter voter participation in the future and we want to ensure that the high levels of voter turnout we’re seeing this year continue.”

The BOE heeded the call earlier this week and hours will be extended at polls this weekend. On Friday and Saturday, polls will be open from 7 a.m. to 5 p.m. and Sunday from 7 a.m. to 4 p.m.

In an interview with the AmNews, BOE Director of Communications & Public Affairs Valerie Diaz said, “We are seeing record turnout. The energy, based on the sites I’ve visited, people are excited to have their voices heard. They have been visiting sites across the city.”

She added that if you are waiting in line and the polls close you can still vote.

“When the polls close, as long as you are online by the time the polls close, you will be able to vote,” she said. “Yes, we are seeing long lines. I have visited sites across the five boroughs and you have voters that are lining up two to three houses before the polls even open.”

Diaz said the BOE is encouraging voters to visit the agency’s website (www.vote.nyc) to make sure they are going to their assigned Early Voting Site. One Election Day over 1,200 sites will be open.

While people are participating in early voting, some are having to fill out affidavit ballots. Diaz assured their votes will be counted once they’re registration is verified.

“Affidavit ballots are counted after the election because the reason that one would vote via affidavit is because their name is not in the poll pad,” she said. “We have to do our due diligence. Those ballots are brought back to the borough office and a bipartisan team of board staff researches and ensures that that voter is in fact registered and eligible to vote via affidavit.”

Early voting ends in the city Sunday, Nov. 1 and voting will resume on Election Day on Nov. 3 from 6 a.m. to 9 p.m. However, it could be days before a winner is announced in the presidential election due to the number of absentee ballots that need to be counted.