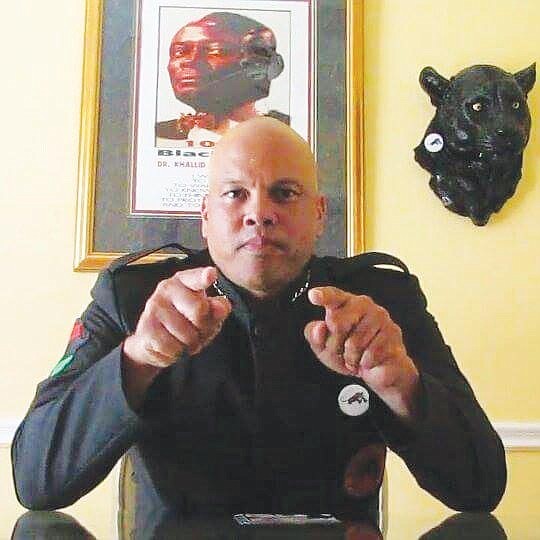 The grassroots community was deeply saddened upon learning that another one of its mighty warriors has departed from among them as word spread that Brother Hashim Nzinga-58, the National Chairman of the New Black Panther Party for Self Defense (NBPP), has joined the ancestral realm. Reports reveal that he transitioned Wednesday, Sept. 9, 2020, at his Atlanta home while surrounded by family and other loved ones, due to complications resulting from colon cancer.

Hashim was born July 24, 1962, in Midland, Texas, and appointed the NBPP’s chief of staff in 1994, under the leadership of Dr. Khalid Abdul Muhammad. Throughout the 1990s he regularly accompanied Dr. Khalid as he lectured and battled the overt racism Americanized Africans consistently encountered throughout the country. He soldiered at the NBPP’s Million Youth March in Harlem, Sept. 5, 1998, and the 2005 Millions More Movement in Washington, D.C. Upon Khalid transitioning on Feb. 17, 2001, Hashim then became the national chief of staff until 2013 when there was a new chairman, Malik Zulu Shabazz, and continued combating colonialism and could still be found at various cultural events for many years. He eventually attained the chairman position.

Hashim participated at various racial protests, whether at Ferguson, Mo. in 2014, Baltimore in 2015, and numerous others, including George Floyd’s earlier this year. Despite the desensitized conditions often caused by posturing on the cold-hearted frontlines for prolonged periods of time, he never lost touch with his indigenous spirituality. The heading on his Facebook page reads “Freedom fighter for God that is using me for change for justice for people that has suffered enough.”

Off the frontlines, he provided security for notable artists such as Lil’ Boosie and Webbie; Pimp C and Bun B of UGK; and Erykah Badu.

His wake was conducted Friday, Sept. 18, at Divine Mortuary Funeral Home in Lithonia, Ga., and home going services were the following day at The 3D Complex in Lithonia.

Mourners reflected on Minister Hashim Nzinga as a “loving father and leaves behind seven beautiful children to carry on his legacy. Hashim is beloved all throughout the Black nation by scores of activists and scholars who were touched by his warm and genuine personality as well as his principled convictions.”

Many recalled, “The chairman always said, ‘Hold the line!’”