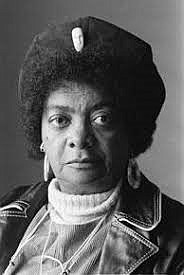 Asked to name a Black woman poet from Chicago, Gwendolyn Brooks is the usual response. While that is deservedly all right, given her supreme prominence, that does not minimize the importance and magnitude of the poems created by Margaret Esse Danner. In fact, when one is mentioned the other almost automatically follows.

Danner, two years older than Brooks, was born in Kentucky, though she often claimed Chicago as her place of birth with Detroit making some claims on her as well. At a very early age as an eighth grader she won a poetry contest with her poem “The Violin,” which vividly describes Stradivarius and Guarnerius violins. She attended several colleges in and around Chicago, including Loyola University, Northwestern and Roosevelt College, then brand new.

But it was several community organizations that were equally significant in shaping her educational outlook and cultural world view, many of them radically oriented. Among the institutions that attracted her was the poetry workshop under the guidance of Inez Cunningham Stark that was based at the South Side Community Art Center. It was here that she forged a lifelong friendship and “rivalry” with Brooks, and Margaret Goss Burroughs.

In 1946, Danner was the founder of Art Associates with an aim toward assembling and promoting the city’s African American poets and writers. Hoyt Fuller, later an editor at Negro Digest and the Black World, was one of her most accomplished comrades as she sought to organize and consolidate the community of Black artists.

The noted white poet Karl Shapiro was among those who helped her to expand her reach, putting her in touch with a wide circle of literary lights, including Langston Hughes. In one of her correspondences to Hughes she wrote: “My life as a poet looks very bleak to me now…Only last night I read one of mine and was told it was elusive, ethereal etc. Not much help from my people in that sort of verse.” Apparently, the critiques helped her to transform her delicate style into one that could convey a stronger dose of racial pride and political consciousness.

“Etta Moten’s Attic” and “Africa, Drifting through Me Sings” were examples of this new direction and resonance with history and context of the Black experience and a few of its notables. She scoured National Geographic magazines, anthropology books and American museums for information and images. More and more she devoured publications that would endow her work with “the power of the African pull to be stronger than Western Civilization in my psyche.” Many of her poems were associated with her encounters with African art objects. She wrote in 1968, “I believe (and have tried for many years to do something positive about this conviction) that the Black should be awakened to his vast beauty.”

In 1951, she joined the staff of Poetry: A Magazine of Verse as an editorial assistant and five years later was the publication’s first African American assistant editor. “Far From Africa: Four Poems,” which would become one of Danner’s most anthologized works, appeared in Poetry in 1951 and earned her a John Hay Whitney fellowship for a trip to Africa, which she delayed until 1966. Her association with Poetry, a colleague denoted, was one of the most rewarding experiences of her life. However, by the late 1950s, according to James Edward Smethurst, “Danner’s career as a poet seemed to her stalled…perhaps in part due to her proclivity for intense emotional and intellectual crushes on individuals and near-paranoid fears of plots against her career.”

At least one publication delved into explaining some of the dilemma, though much about her personal life remains undisclosed. We do know, though, that she had one daughter and married Otto Cunningham twice.

When she moved to Detroit in the late ’50s she found a cluster of established and emerging writers and artists, wasting no time gaining entry. As cited earlier, her new associates included Randall, LaGrone, Harold Lawrence, Madgett, Woodie King Jr. and James Thompson. Her comparatively recent arrival didn’t prevent her from becoming named writer-in-resident at Wayne State University, and this was the success she needed to secure an even stronger base in the community and procure a place to house her dream that became Boone House. It was soon a vital center of poetic and artistic activity, given even more glow and acclaim with the presence of such luminaries as Robert Hayden, Owen Dodson and Hughes. From this niche and sinecure she aroused international attention, which was embellished when she was included in Rosey Pool’s anthology, “Beyond the Blues,” along with several other local writers.

One of the products of Boone House became the first book published by Randall’s Broadside Press, “Poem Counterpoem” (1966), a collaboration between the two poets. Later, in his anthology “The Black Poets,” Randall included Danner’s “This is an African worm.”

“This is an African worm,” the poem began. “But then a worm in any land/is still a worm. It will not stride, run, stand up before the butterflies, who have passed their worm-like state. It must keep low, not lift its head. I’ve had the dread experience, I know a worm can do no thing but crawl. Crawl and wait.”

During her stay in Detroit she became a member of the Bahai faith, a belief she shared with the poet Robert Hayden and she often promoted the religion at various events and convocations. Awarded a John Hay Whitney Fellowship in 1966, she traveled to Africa and eventually participated in the First World Festival of the Negro Arts in Dakar, Senegal.

“Iron Lace” (1968) was among her last volumes of poetry, though several of her poems have been included in anthologies. She died Jan. 1, 1984 in Chicago. Her papers are held by the University of Chicago library.

Her relationships with poets in Detroit and Chicago need further exposition.

She was born as the Harlem Renaissance was coming into existence and lived to see the literary manifestations of the ’60s.

This Week in Black History

Nov. 22, 1930: Elijah Poole initiated the founding of the Nation of Islam in Detroit.