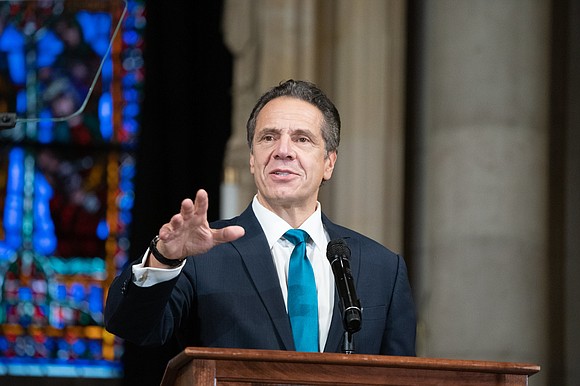 After praising him for his leadership, calling him a “people’s governor with a sensible approach,” the Rev. Michael Livingston, the pastor of Riverside Church, turned his pulpit over to Gov. Cuomo on Sunday, who used a metaphor of a low tide to illustrate how devastated the nation has been for the last eight months of the coronavirus pandemic.

“I wrote a book on the lessons to be learned from the COVID crisis, and I think of COVID as low tide in America,” the governor began, after acknowledging the presence of several notables, including former Rep. Charles Rangel, his successor Adriano Espaillat, Speaker Carl Heastie, Marc Morial of the National Urban League, and the NAACP’s Hazel Dukes, whom he called his second mother.

“Do you know how when you stand on the beach,” he continued, “and you look out at the water, and the tide is high, and all you see is the surface of the water, and the waves, and everything looks nice and beautiful. But you stand at the same point at low tide, when the water goes out and the sea bottom is revealed, and you see rocks, and you see debris, and you see the ugliness that the water was covering. COVID was low tide in America, and it showed us the ugliness and flaws deep down in our society.”

At the top of things the low tide revealed, Cuomo said was “the lack of trust in the federal government. We have a vaccine on the way…But polls say 50% of the American people say they would not take the vaccine if it were available today because they don’t trust the way this federal government has politicized the process.”

He stated that many of the nation’s undocumented people believe the government may use the vaccine process to identify them for deportation. “New York must make sure that doesn’t happen,” he said.

Much of his sermon, so to speak, was very similar to the daily reports he delivered on the pandemic, especially when he enumerated the number of people infected by the disease, the increase in those hospitalized, and the rising death rate. He expressed a concern about how long it will take to administer the vaccine to 330 million people, comparing it to the extensive time it has taken to conduct 120 million tests. “The federal government must learn from its mistakes and dedicate the resources and supplies to get the job done right this time. Rhetoric only goes so far,” he asserted.

But his speech reached its most passionate moment when he returned to the low-tide theme and how it has showed the deep inequality in our country and the systemic discrimination in this nation. In his daily reports on COVID-19, he tended to cite the numbers without any racial or ethnic specification, but on this occasion he detailed how Black people die at twice the rate of white people. “The truth is COVID killed Hispanic people at 1.5 times the rate of white people. Those are ugly facts. The COVID infection rate was 2.5 times higher among Black and Hispanic people and the hospitalization rate for Black and Hispanic patients was over three times higher compared to white patients. Those are ugly facts,” he lamented. “COVID low tide showed that the existing health disparities in this country made it more likely that Blacks would die from the virus. Black populations are 1.7 times more likely to have diabetes; 1.4 times more likely to have hypertension; 1.3 times more likely to face obesity; and three times more likely to have asthma. Those are the ugly facts.”

The governor made it plain that when the vaccine arrives, and it has been reported to be available by the end of the year, that “the Black and brown communities who were first on the list of those who died cannot be last on the list of who receives the vaccine, period.”