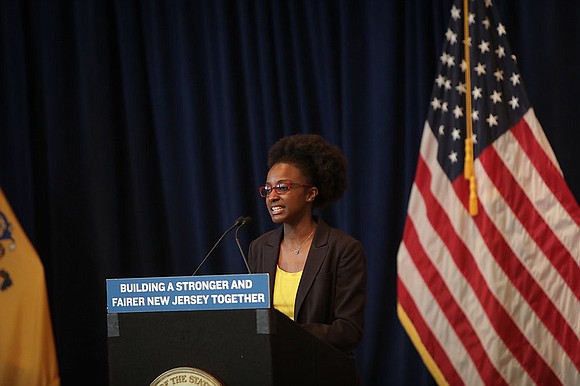 Governor Murphy announces his appointments of Dianna Houenou as Chair of the Cannabis Regulatory Commission, and Jeff Brown will serve as Executive Director of the Commission at the Trenton War Memorial on Friday, November 6th, 2020. Edwin J. Torres/Governor’s Office

During the General Election New Jerseyans voted to legalize marijuana. The measure was approved taking nearly 67% of the vote.

Marijuana will become legal in the Garden State in January 2021; however, in the meantime, lawmakers and business leaders are forming ways to regulate and properly sell cannabis. Gov. Phil Murphy appointed Dianna Houenou as chair of the Cannabis Regulatory Commission Jeff Brown will serve as executive director.

“Dianna has been a critical voice for social justice and equity on my team for the past year and a half after spending several years working on the fight to legalize marijuana with the ACLU,” said Murphy. “Her commitment to doing what is right and to leaving no one behind has powered our criminal justice reform agenda, and I am immensely proud that she will be continuing that commitment as chair of the Cannabis Regulatory Commission.”

Houenou said New Jerseyans have long supported expansions of the medicinal cannabis program and have raised their voices in support of legalized personal use for adults.

“From promoting inclusion in the permit holders to making affirmative investments in the future of our communities of color, New Jersey is poised to mark its position as a leader in advancing racial and social justice,” she said. “The opportunities for equity that lay ahead are limitless, and I look forward to seizing them for the benefit of New Jersey’s communities that have been disproportionately harmed by failed past policies.”

As marijuana becomes legal in New Jersey, advocates say the move is critical to criminal and racial justice reform in the state. Officials from the New Jersey United for Marijuana Reform (NJUMR) say lawmakers must pass legislation to implement cannabis legalization and decriminalization.

“Legislators must pass a robust decriminalization bill to protect residents in the lead-up to full implementation of legalization, which will likely take months to put into place. New Jersey must stop the cannabis-related arrests that take place, on average, every 15 minutes in our state. After decades of prohibition, the voters have made clear that it is time to end unjust and unnecessary cannabis-related arrests.”