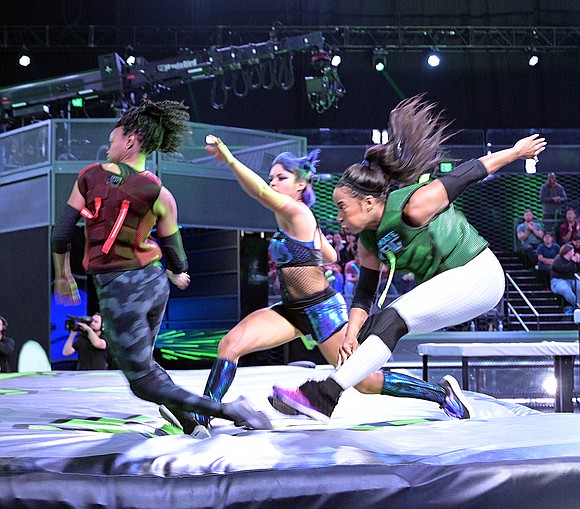 Growing up in New Jersey, Lisa Barber no doubt engaged in some fierce games of tag, but she quickly realized that didn’t prepare her for FOX’s new competition show, “Ultimate Tag.” A true competitor to the core, the three-time world champion track star rose to the occasion, triumphing in week one and scoring the $10,000 prize among the women.

Barber and twin sister Miki, both sprinters, were contacted by a friend last year and asked if they were interested in doing a tag show. They submitted their resumes along with videos of them talking about themselves. Producers selected them from among many applicants and invited them to try out.

“When we tried out, it was a regular game of tag, like you played as a kid,” said Barber. “This was a process. There were steps to each level. They liked us both.”

The weekend the show was being filmed (about a year ago), Miki opted instead to head to their alma mater, University of South Carolina, because her jersey was being retired. That left Lisa to go it alone. She felt confident that her running skills would give her an edge. To keep things in a championship mindset, Olympic medalist in the 400-meter hurdles Lashinda Demus came to cheer Barber on at the taping.

When Barber arrived for the taping at Universal Studios, she saw it was not a traditional game of tag. Instead, she ran a very challenging and elaborate obstacle course against skilled reality competitors. “That was the most crazy, exciting, scary thing I’ve ever done,” said Barber. In true television fashion, despite the exertion, her makeup stayed flawless, for which Barber gives a shout out to the amazing makeup artist.

“A lot of people tuned in for the premiere last week,” said Barber. She even drew favorable comments on Celebrity Watch Party, that also appears on FOX, on which celebrities watch and comment on FOX shows. “Master P and Romeo were cheering me on.”

Barber said she hopes “Ultimate Tag” scores a season two and she’s invited back. She’s also open to other competition shows. Seeing the reaction of viewers has been incredible.

“It was a great opportunity,” said Barber, who continues to train for next year’s Olympics. “It was fun. When you get opportunities, it’s a life lesson. You never know where it’s going to go. Sometimes you have to take a chance on things and just do it and go for it. The show gave me a boost of confidence.”