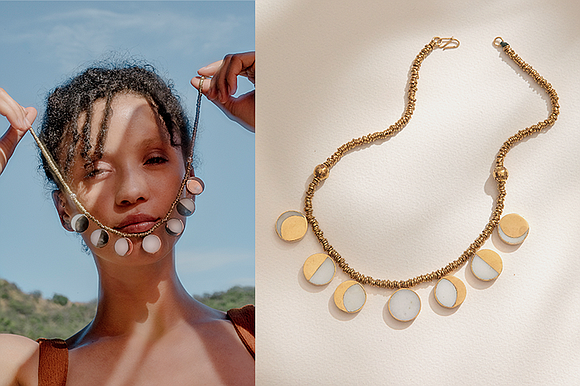 For summer ’20, the Pamela Love jewelry brand teamed up with Kyleigh Kuhn to produce the company’s signature Moon Phase Necklace. With inlaid jewelry that she collected from “Chicken Street” in Kabul, Afghanistan, Kuhn was inspired to create custom pieces to support the jewelry trade. Pamela Love immediately jumped at the opportunity to collaborate with Kuhn on the production of this stone inlay necklace, handcrafted by jewelers in Afghanistan. It’s so beautiful.

During Love’s CDFA mentorship, Love and Kuhn were introduced and paired together by Vogue’s editor in chief Anna Wintour. Kuhn had just returned from a trip to Afghanistan, where she witnessed minefields being transformed into orchards and vineyards with her family’s organization.

She was also excited to team up with Love on this special project to create this signature Moon Phase Necklace. As a means towards peace, the work offered the potential to support the country’s growth in the jewelry trade. A moon phase motif was applied to the traditional style of Afghan jewelry. With the craftsmanship of Afghan artisans, the result was a white quartz and white brass inlaid statement necklace that showcased the phases of the moon—a universal symbol of change.

With this collaboration, their hope was to bring the skills of local artisans to global markets, and to inspire more young men and women to retain this precious element of Afghan heritage.

For Love, this necklace is so much more than a jewelry piece. “I believe it is no accident that the design is the phases of the moon,” said Love. “Sometimes it feels like the light has left, but in time, the sun hits a sliver of us again and reignites us back to become a full mirror to light up the night.” The light always returns. Be grateful for the next person who holds out a hand to welcome you back into the light the way Love did.

Their first attempt to design pieces in Afghanistan was fraught with setbacks. For instance, sample drawings were misinterpreted, and the cost and time of adjusting them took a toll on the team’s patience. But even though there were many setbacks, this time felt different.

When she started creating jewelry, Kuhn was in her early twenties, learning the New York jewelry industry and the complicated politics of business in Afghanistan simultaneously. In 2014, the Roots of Peace office in Kabul was attacked by the Taliban. Back then, she was forced to stop her jewelry project and found herself questioning whether to continue.

When Love and Kuhn met, Kuhn was new to New York, leaving her job as a teacher’s assistant at U.C. Berkeley in Global Studies. After returning from her second trip to Afghanistan, she began working with Afghan jewelry artisans to bring their skills to the U.S. market.