Lewis to continue bowling after graduation 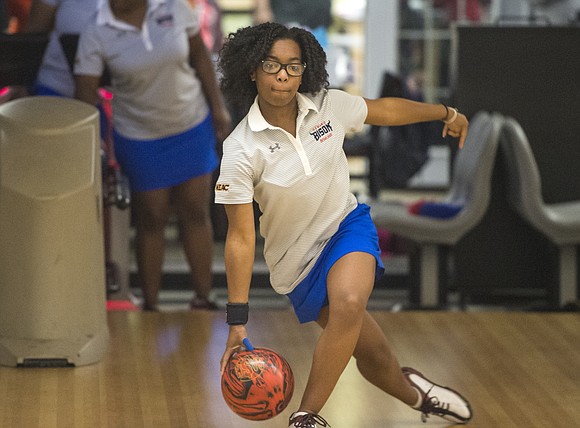 Téa Lewis’ time as a Howard University athlete has officially come to an end and the marketing major has graduated, but her love of bowling endures. She said being a student-athlete taught her to work hard no matter what.

“Bowling is a mentally and physically draining sport,” said Lewis, who competed throughout her four years at Howard. “There have been days where my body and my mind were exhausted and I just wanted to lay down and not do anything, but I pushed through it to be there for my teammates and myself.

“This goes to what I did in the classroom,” she continued. “On the nights when I’m too tired to study or I’m struggling with something that my professor is teaching, I dig deeper and find that extra gear I didn’t know I had and pulled through.”

Bowling is somewhat of a family tradition for Lewis, whose parents and grandparents bowled (her aunt was on Howard’s bowling team). Being a collegiate athlete gave Lewis the courage to go after what she wants.

“I’ll be the first to admit, I’m not the best bowler…or even the best candidate for a lot of the positions I’ve applied for, but bowling has taught me I’m my biggest competitor. I can’t control anybody else, but I can control what I do. Even though I may not be the best, I have the mindset that I am the best. I don’t let anything stand in my way,” Lewis said.

After social distancing subsides, Lewis has a job lined up with AT&T in Dallas in the business-to-business sales program. The training lasts four to six months during which time she’ll learn about the products and technologies for businesses, and she can decide what aspect of sales suits her. At the conclusion, she will return to the East Coast for work.

Lewis also intends to continue training as a bowler in the hopes of competing professionally in the future. “I want to impact the game of bowling,” she said. “I kind of want to be the Tiger Woods or Serena Williams of bowling. When I watch pro bowling, I don’t see a lot of people that look like me.

“I have a couple of role models that I look up to, GG Mason and Kim Terrell-Kearney, and how they impacted the game and got more people of color into bowling. I want to continue down that path and get more girls and women of color to participate in bowling and see it as more than a recreational activity; see it as a competitive sport.”