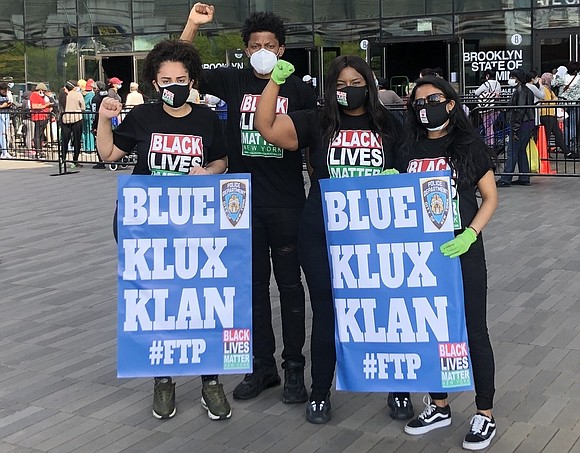 On Friday, May 15 at 3 p.m., a rally to protest against the continued police brutality during social distancing enforcement was held in front of the Barclays Center.

One of the recent police brutality incidents caught on video that sparked this rally, showed Kaleemah Rozier, a 22-year old mother, being brutally shoved to the ground in front of her baby by NYPD officers for “improperly wearing her face mask.” The arrest, which took place at the Atlantic-Barclays Subway station in Brooklyn, garnered outrage from Black activists and people in the community.

“The most disrespected and unprotected person in America is the Black woman,” stated Chivona Newsome of Black Lives Matter of Greater New York who is also the sister of the organizations’ chairman, Hawk Newsome. “We may not be respected and we may not be protected as Black women, but there is no one stronger. We are stronger than superheroes.” Newsome said that she foresaw the issues of the NYPD being chosen to enforce social distancing regulations. Though the Black Lives Matter of Greater New York wrote a letter to Gov. Andrew Cuomo about their concern over this choice, there has still been no response.

Donna Wright, mother of Donni Wright, came out to speak on behalf of her son who was seen in a viral video getting violently crushed to the ground by an officer––who was not wearing a face mask himself––after allegedly violating social distancing regulations. “My son is traumatized right now and is in so much pain,” she said.

Mayor Bill De Blasio tweeted that he was disturbed over the arrest of Donni Wright and that there was a prompt investigation of the unnamed police officer who is now stripped of his badge and gun. However, community leaders urge that this is not enough.

Wright is demanding that the officer who has done this to her son be brought to justice for his actions, while the other activists are also pressuring Gov. Andrew Cuomo and Mayor Bill De Blasio to do something about the clear racism that is undeniable in the NYPD.

Hawk Newsome declared that NYPD Chief Commissioner Dermot Shea is backing up the aggressive and bias arrests against Black and Brown people and refusing to call out the racism in the NYPD.