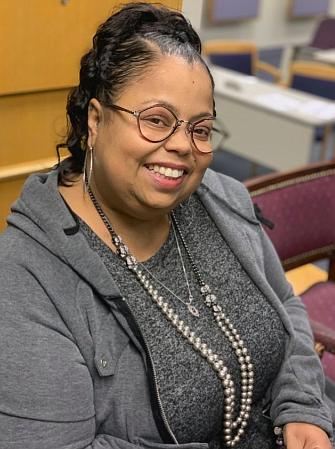 Three years ago when author and scholar Timothy Tyson published his book “The Blood of Emmett Till,” it further confirmed that Carolyn Bryant Donham lied about the incident that led up to Till’s lynching, and that was all Airicka Gordon-Taylor needed to renew her quest for justice for her slain cousin. Her determined pursuit has come to an end with reports that she has died, according to an announcement from the Congressional Black Caucus.

Gordon-Taylor, who studied at Elmhurst College and Illinois State University, was the surrogate daughter of Mamie Till-Mobley, Emmett’s mother, and for the last eleven years was the executive director of the Mamie Till Mobley Memorial Foundation.

She was praised by the CBC for her unwavering fight against racial violence, and she worked “relentlessly to preserve Emmett Till’s legacy through enrichment programs for youth that focused on Black history, creative arts, health and education. This is a tremendous loss to the entire CBC family. Consistent with Mrs. Gordon Taylor’s life’s work, we will also redouble our efforts to ensure that Emmett Till, who was lynched 65 years ago, is never forgotten. We extend our sincerest condolences to Mrs. Gordon Taylor’s husband, her mother, her family and all those impacted by her remarkable life and work.”

Ever since his brutal murder in 1955, Till, a14-year-old resident of Chicago visiting his relatives in Money, Mississippi, has never been far from public memory. Several of his relatives, including Gordon-Taylor, Wheeler Parker, and the late Simeon Wright were constantly involved in various activities, organizations, and institutions to make sure he was not forgotten and that justice would one day prevail. Wright, Emmett’s first cousin, who, like Wheeler, was with him on that fateful night when he was abducted and savagely beaten to death, practically committed the latter part of his life to Till, including working on books, documentaries and a film project by Whoopi Goldberg and Keith Beauchamp, based on his book “Simeon’s Story,” which he authored. Wright, 74, died of complications from bone cancer in 2017.

Gordon-Taylor recounted the time when Donham called her and told her about her false confession, which Gordon-Taylor knew all along was a lie. She became incensed when Donham, now 86, compared Emmett’s death with losing one of her sons. “There’s no comparison,” Gordon-Taylor said. “Her husband brutally killed my cousin.”

Donham’s husband, Roy Bryant and his half-brother J.W. Milam, were acquitted of the murder and later confessed to the crime for a payment of $4,000 to author William Bradford Huie.

Less than a month ago, the CBC along with an overwhelming majority of House members passed the Emmett Till Anti-lynching Act to fulfill our nation’s long overdue promise of declaring lynchings a federal crime. The CBC promised to continue efforts to ensure that this critical bill is finally signed into law.