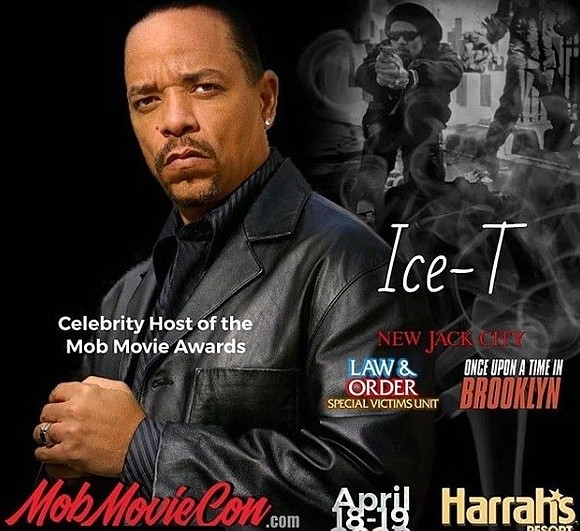 Ice-T announced as the host of the MOB MOVIE AWARDS, which will kick off MobMovieCon at Atlantic City's HARRAH'S RESORT AND CASINO on April 18th MobMovieCon photo

The Mob Movie Awards, which will take place on April 18 at the Harrahs Resort & Casino in Atlantic City, New Jersey, will be hosted by legendary hip hop artist and actor Ice- T. The actor, who is perhaps best known today for his portrayal of Odafin “Fin” Tutuola on “Law & Order: SVU,” will host a dinner and awards ceremony featuring an all-star list of presenters, special performances, and more. Said Michael Mota, co-founder of Mob Movie Con: “We look forward to hosting Ice-T, and an exclusive number of fans, at our kick-off event.”

Deadline is exclusively reporting that Grammy-winning recording artist and Oscar-nominated actress Mary J. Blige has been named the ambassador for this year’s American Black Film Festival, which will go down in Miami Beach, Florida from June 17-21. Under the title, Blige will help bring media awareness to the ABFF’s mission and its 24 -year legacy, as well as headline a one-on-one conversation during the Center Stage Talk series on June 18. The discussion will spotlight the Queen of Hip Hop Soul’s music career, her transition into films and television and her life’s journey as one of the most successful artists of all time.

Philanthropic influencer Jean Shafiroff and Christine Schott Ledes, president of the American Influencer Association, hosted a philanthropic luncheon on Saturday, Feb. 15, at The Brazilian Court in Palm Beach, Florida. This was the second of a series of events the two will host on influencers and philanthropy this year. With more than 430,000 followers on Instagram, Shafiroff was one of the first to embrace awareness for the charities she and her husband financier Martin Shafiroff support.