Pompey focuses on doing the best for athletes 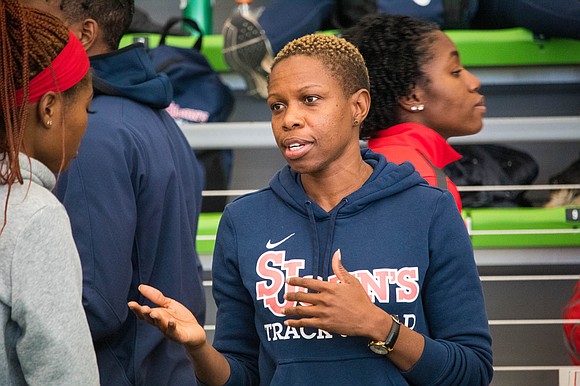 Now should be a joyful time of the year for track and field athletes and their coaches. Collegiate student-athletes would be marking the end of outdoor season and hopefully gearing up for the NCAA Championships. Those with Olympic aspirations would be readying for qualifying meets. Instead there is the isolation of sheltering in place and the pain and anguish of racism.

Four-time Olympic sprinter Aliann Pompey, sprints and hurdles coach at St. John’s University, has been in regular contact with Red Storm student-athletes and working to sustain their motivation for an eventual return to campus. The track and field athletes and three other St. John’s programs recently received Division I Public Recognition Awards from the NCAA for outstanding academic achievement.

Heightened racial unrest hit the student-athletes quite hard, and Pompey has worked with them to process what is going on. “I started out having one-on-one [conversations] and realized how deep it went. We decided as a staff to address it as a whole and talk to them, let them know where we as the leadership on the team stand, offer support and offer them the opportunity to communicate and be heard,” said Pompey.

Pompey, who had to cancel her annual track meet in Georgetown, Guyana, due to the coronavirus, also understands the frustrations of athletes that were anticipating competing in the 2020 Olympic Games (which have been postponed until 2021). “You have the people that were looking at Tokyo 2020 in 2020…as sort of their last hurrah,” said Pompey, who ended her track career following the 2012 Olympics. “They invested their time, resources and energy into this last go-around. For some of them, Tokyo 2021 isn’t a possibility.”

Others have processed their disappointment and are finding creative ways to train, which they are sharing with fellow athletes. International federations have started laying out plans for qualifying and are trying to find ways to get people into competition shape. “This is not a small interruption,” said Pompey. “I tell people, ‘I prepared four years for the Olympics.’ It cuts really deep.”

Pompey was recently acknowledged for her athletic career when she was named to the Times Union’s list of the greatest athletes to come out of the Capital Region Area of the State of New York. She attended high school in Albany and her father still lives there. This honor was quite meaningful to her.

As of last year, Pompey is president of the Panam Sports Athletes’ Commission. “We were really as a commission very proactive with the athletes,” she said. “We took stock of what everyone was feeling early in the pandemic. We liaised with the IOC (International Olympic Committee) and let them know the athletes’ feedback…so they can figure out…how we can support them in this time.”