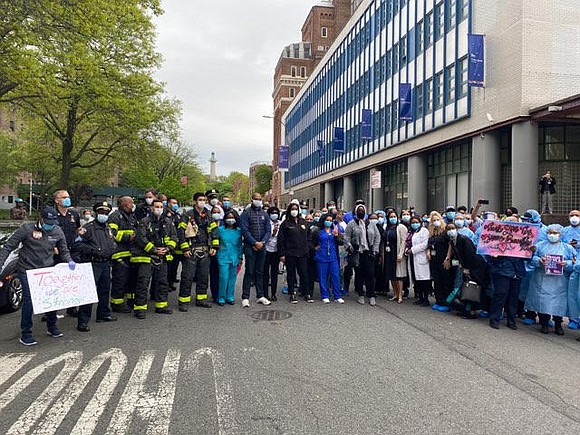 “As labor unions, we stand in solidarity with the hundreds of thousands of people across the country who have risen up to protest against state violence towards people of color, systemic racism, and police brutality,” read the statement. “We cannot and will not stand down as we witness daily the violent response of the NYPD without reprimand nor consequence.”

Other unions have expressed anti-police brutality sentiments as well lately. Last week, the AmNews reported that the Industrial Workers of the World (IWW) demanded that the AFL-CIO drop police unions from its federation. The AmNews sent a request to the AFL-CIO for comment, but didn’t get a response.

“The failure of the NYPD to act with appropriate restraint is inexcusable,” the IWW statement said. “We demand better for our communities, our voices, our democracy.

“While we do not, and never will, condone violence against police nor property, we also will not allow the actions of a misguided few to distract from the message of the massive, peaceful protests demanding that Black Lives Matter,” continued the statement.

Police unions have enjoyed a higher membership rate than other unions despite the recent attacks on organized labor. They wield significant power in local politics in every major city and at times force anything resembling police reform back into the dark. But there’s been a recent sea change in American political and social issues.

A recent Monmouth poll released at the beginning of this month revealed the 57% of Americans and 49% of whites believe that law enforcement would likely use excessive force on Black people. It’s the first time that a majority of Americans felt this way and counts the highest rate of whites believing that there is anti-Black policing.

In that same poll six years ago, after the death of Eric Garner, only 33% of Americans and 26% of whites believed police used excessive force against Black people.

On Twitter, well-known Republican pollster Frank Luntz referred to this news as a “‘Beatles’ on Ed Sullivan kind of event.”

As for the union leaders, their statement called out Pres. Donald Trump for dividing the country and giving law enforcement a blank check to be violent and to tear-gas protestors while threatening unconstitutional military action.

“We will not abandon the righteous goal of ending police brutality. We will not desist from peaceful but powerful demands for racial justice,” the statement read. “As labor leaders, and as representatives of millions of New York’s working people––Black, Brown and white––we continue to stand in solidarity with the protest movements against racist violence... The same militarized police forces that are brutalizing people marching for racial justice today, have in the past been used against workers fighting for their rights...we will overcome.”