Blair looks toward life after Howard 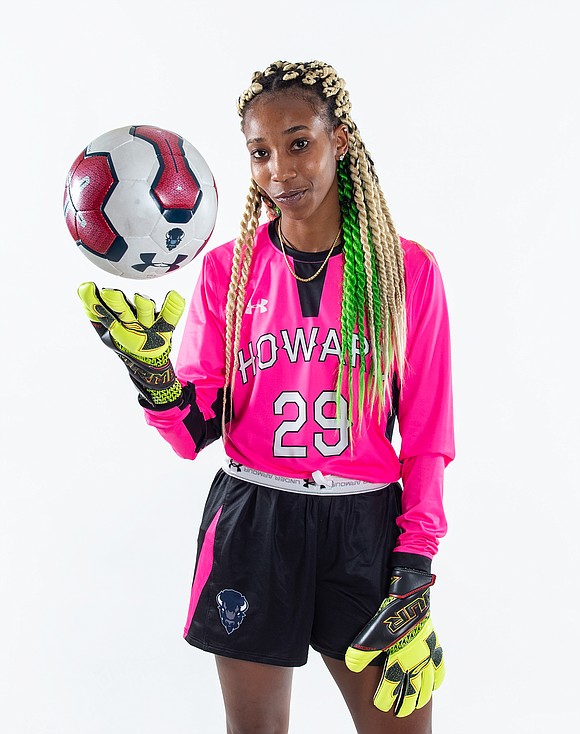 Soccer goalie Rochelle Blair, 22, wishes she was back home in New Jersey, but her parents, both semi-retired educators, and the family dog are sheltering in place in Florida, where they were spending the winter before the world changed due to COVID-19. Blair is in Maryland with a friend, keeping a positive attitude despite not having the graduation she’d hoped for at Howard University.

Her dad coached basketball and football, and Blair credits him for nurturing her love of sports. She first played soccer at age three and her parents appreciated that expended some of her abundant energy. By the time the family settled in New Jersey when she was six, it was her favorite sport.

“I got on a little team that would practice right outside my elementary school,” she said. “I fell in love with it and it grew. I never wanted to stop playing. I started doing indoor things. I joined more teams.”

She also dabbled in basketball, but soccer was her love and she excelled despite having asthma. Although it didn’t determine her focusing on the goalie position, that has been a good choice, and she’s even kept an inhaler by the goalpost, especially on hot days.

Family ties are part of the reason Blair chose to attend Howard. Her mother taught there for more than a decade and most recently taught at the University of Medicine and Dentistry of New Jersey. Blair wore the green highlight in her hair in honor of her mother and the Alpha Kappa Alpha sorority. “I’m a legacy because of my mother, but because of soccer, I wasn’t able to pledge,” Blair said. “I was so excited we had pink jerseys my senior year [pink and green are AKA’s colors].”

Her father has attended almost every single one of Blair’s games. Her mother, who still mentors doctoral students, has missed some due to work obligations. Blair is looking into joining AKA as a post-grad. Playing a sport at Howard was fantastic and she treasures having been part of “a team of beautiful girls all different shades of brown,” she said. “I’d never been on a team that looked like that. It was really cool.”

An elementary education major, Blair is hoping to begin teaching in the near future. Soccer is still on her radar and she plans to join an adult team and said it would be fantastic to coach soccer to elementary school kids.

“Since we’ve been under quarantine, I’ve been reading books to kids online and doing mini-lessons,” she said. “Teaching elementary school is where my heart is.”