Bronx residents hit the streets to protest against police violence 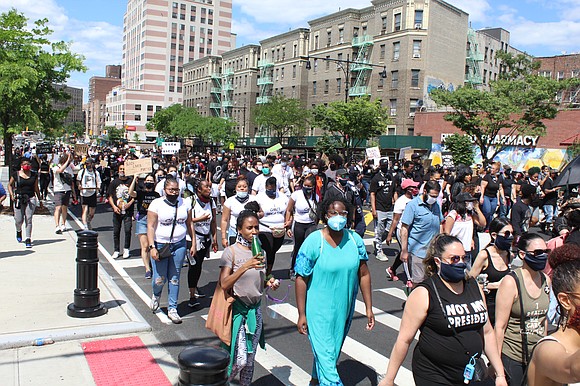 As protests around the city over the police killing of George Floyd continue, hundreds of demonstrators made their way down the Grand Concourse in the Bronx on Sunday, June 7, for the “We All We Got, We All We Need” march. Aimed at engaging local residents in the fight against police brutality, the march was led by hip hop artist and activist Mysonne––who is a native of the Bronx’s Highbridge neighborhood––and his organization Until Freedom. Mysonne was joined by activist Tamika Mallory, Public Advocate Jumaane Williams, Bronx Borough Pres. Ruben Diaz Jr., Assemblyman Michael Blake and Mount Vernon, NY mayor Shawyn Patterson-Howard.

“The Bronx is a borough that is still predominantly Black and Brown, and our communities are affected by both over-policing and the pressure of gentrification,” said Mysonne. “We are marching to show our solidarity as a borough, for the right of people who are born and raised here to be free from police violence and to have the economic and community support that we need to thrive.”

Protest in the Bronx

The demonstration started at the intersection of Fordham Road and Grand Concourse and ended up at the Bronx County Courthouse. Several businesses on Fordham Road and Burnside Avenue were targeted by looters last week and there had been no major protests in the Bronx. “What happened on Fordham Road and Burnside wasn’t justice and George Floyd would not have wanted this done in his name,” Diaz said last week. “We call for peaceful protest, for everyone to come together against systemic racism and inequality without hurting those who are right here living in our own communities.”

Mallory said Bronx residents needed a demonstration to let them express their outrage about police brutality. “I’m so glad we were able to bring this movement directly to the heart of the community,” Mallory told the AmNews. “All the marches that we have been seeing have been happening in the downtown area. It’s important for people to feel that they too can be a part of something. Mysonne, being from the Bronx, made an opportunity for people to come together.”