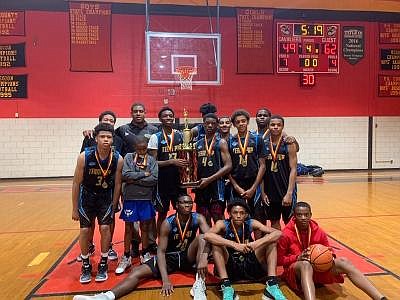 Team Pop and Skye Own Contributed

Summer league basketball has been tightly intertwined with New York City urban culture for 70 years. It began when the legendary Holcombe Rucker founded a youth league through the Saint Phillips Church community center in Harlem in 1946, and then established the Rucker League in 1950 as the progenitor of summer youth basketball globally.

Yet this summer, tens of thousands of girls and boys across the country will be without the expansive activity as the novel coronavirus pandemic has forced a cancellation of most leagues and tournaments.

“It’s just not tenable and is too much of a liability,” said LaMarre Dyson, a longtime staple of New York City youth basketball and the director of the Kyrie Irving-Rod Strickland Summer League, which would have been preparing to start its 23rd season. “Our first concern and responsibility is the health and safety of our children. The infrastructures and measures aren’t in place to reasonably hold tournaments this summer,” Dyson asserted.

“As we continue to navigate the evolving impact of COVID-19, we are canceling the remainder of the 2020 EYBL season,” Nike stated on its EYBL website.

Summer youth basketball leagues are more than vehicles for pre-teens and teenagers to hone their athletic skills. They also serve as spaces for their social-emotional development, as well as tools of community building for adults.

Derek Haynes, the head coach for the boys and girls teams at St. Mark The Evangelist School in Harlem, the first Catholic church and school to open its doors to Black people in Harlem, maintains the potential negative impact of not having summer leagues is yet to be determined but certainly forthcoming.

“For years summer basketball has been an effective emotional and physical outlet for kids," said Haynes. “At St. Mark during the pandemic parents, coaches and administrators at the school have been in constant contact because we know the effects of the cancellation of summer tournaments can have on our student-athletes.”

Those such as Bryce Simmons, a freshman guard at Monsignor Scanlon High School in the Bronx, who plays for his father’s—Clifford Simmons—AAU program, Team Pop, viewed it as a springboard. Bryce, who will make the jump from JV to varsity in his sophomore year, acknowledged he was eager to test his game as there was a potential opportunity to play on the EYBL circuit.

“I was amped to play up,” said Bryce, 15, who would have faced older competition. “It’s a bummer because this summer is really important for me.”

For Staten Islander Skye Owen, the summer campaign was going to be a platform to enhance her national profile. A heavily recruited sophomore point guard for St. Francis High School in Brooklyn, with which she won the girls’ Catholic school New York City championship this past winter, Owen was named Second-Team All-City and already has Wake Forest, Northwestern, Texas Tech and James Madison among her many suitors.

“One of my goals is to be a McDonald’s All-American,” said the 16-year-old Owens, “and to reach it you have to play against the best competition. I’m also really going to miss the camaraderie my teammates [on the IExcel AAU program] and I have. So yeah, it’s more than just basketball.”