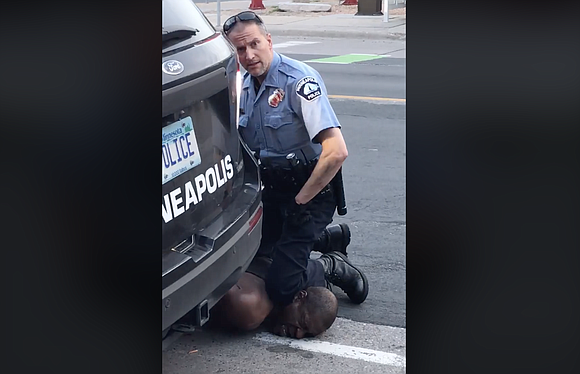 Tired of being tired, protesters found the energy to let their voices be heard.

The past week-plus of protests have kept America on edge. The murder of George Floyd by Minneapolis Police Department officers lit a match under the country which the global pandemic couldn’t stop. Floyd’s mother Roxie Washington called for justice “because he was good” during a news conference. Friend and former NBA player Stephen Jackson said “I’m ready to fight. I’m ready to stand for my brother.”

According to an emailed statement from the Community Service Society, George Floyd’s murder is proof that even during a global pandemic, Black life doesn’t matter.

“The COVID-19 pandemic has laid bare the stark landscape of this endemic racism in jarringly disproportionate rates of death, destruction and economic ruin in Black and Brown communities,” read the statement. “The protests, and indeed the violence that has accompanied some of them, are inexorable responses to unaddressed issues and conditions in our cities and across the nation––and to the hidden and blatantly racist policies that dictate  access to healthcare, jobs, decent housing, quality education, and freedom from police incursion in the fabric of daily life based on race and income,” continued the statement.

CSS’ statement also said the government sent a message to those who are fine with “legalized looting” on Wall Street and “legalized murder” by the police that the structural inequalities plaguing America, which reduce people of color to second-class citizens, are fine.

The condemnations of police brutality have been met with more brutality towards protesters.

While the protests have been peaceful by day, outsiders and agitators show up at night to destroy property and loot businesses. Although some of the daytime protests have brought out looters, the majority calling for peace outweigh the looters. The night brings a different story. At the beginning of the week New York City Mayor Bill de Blasio instituted an 11 p.m. curfew after the looting of retail spots in SoHo and Herald Square.

That didn’t stop the looters from taking to the streets of Manhattan and the Bronx. From Fordham Road in the Bronx to multiple neighborhoods in Manhattan, the agitators ramped up the looting and destruction of property.

When asked by a reporter if New York should bring in the National Guard, Mayor Bill de Blasio said he wouldn’t even consider the option.

“Someone needs a history lesson,” said de Blasio during the media briefing. “When outside armed forces go into communities, no good comes of it. We have seen this for decades. Go back to the ’50s, ’60s with the Civil Rights Movement on through all the way up to today.”

Cuomo wouldn’t consider the National Guard either, but called the NYPD’s handling of looters “a disgrace.”

“The police must stop the looting and the criminal activity,” said Cuomo during his media briefing. “That is the essence of the police force. They are supposed to protect the community, protect the property,” Cuomo said at his daily briefing at the state Capitol. “They did not do that in New York City last night. And I am disappointed and outraged about what happened in New York City last night.”

“Governor Cuomo has joined the mob in trampling police officers’ rights,” he said. “He is the governor of New York State. He cannot prejudge an incident on live TV and then claim that there will be due process for that police officer. He needs to stop pretending to be ‘Andrew Cuomo from Queens’ and start being a leader. We have terrorists burning and looting our city for three nights running. Neither he nor any other elected official has a plan to stop it, other than wrongly blaming the chaos on the cops. At a time when we need leadership the most, police officers know we are completely alone.”

Pres. Donald Trump faced criticism and mockery from the media and political pundits when news leaked that he was hiding in the White House bunker (which is supposed to only be used in case of terrorist attacks) over the weekend. Trump, in a desperate attempt to present himself as a strongman, had military units aggressively clear peaceful protesters from in front of the White House with tear gas and other weapons so that he could walk through and across the street to St. John’s Episcopal Church and pose for a photo. Trump, and First Lady Melania Trump who is Roman Catholic, stood in front of a statue of John Paul II for a few minutes while Trump held a bible in his hand. His actions were met with disdain from Washington Archbishop Wilton Gregory.

“Saint Pope John Paul II was an ardent defender of the rights and dignity of human beings. His legacy bears vivid witness to that truth," said Gregory in a statement. "He certainly would not condone the use of tear gas and other deterrents to silence, scatter or intimidate them for a photo opportunity in front of a place of worship and peace.”

“The bible is not a prop,” said Gregory.

Meanwhile, de Blasio instituted an 8 p.m. curfew in the five boroughs for the rest of this week, but that drew some pushback. Human NYC, an organization that focuses on the homeless on the streets and in subway stations, said that their constituents don’t have a place to call home and don’t want to experience the drab conditions of a shelter.

“The #HomelessCantStayHome campaign stands in solidarity with the protests and condemns the curfew. Thousands of homeless New Yorkers have no other place to go,” said Human NYC Executive Director Josh Dean. “For over two months, homeless New Yorkers and allies have been demanding that Mayor de Blasio open private hotel rooms for homeless New Yorkers, including those living on the streets. The city has failed to meet these demands. The enactment of the curfew is yet another way the city is turning a blind eye towards our homeless neighbors by refusing to offer essential protection from both police violence and from a global pandemic”

Dean hoped that authorities wouldn’t force homeless New Yorkers into shelters where they risk COVID-19 and he believed the police should play no role in homeless outreach.

New York City Council Member Ydanis Rodriguez said that the curfew is in itself unconstitutional and stated that this would only make things worse for communities of color.

“The curfew imposed on the city and that begins tonight was a poorly thought out plan that needs to be rescinded,” said Rodriguez. “Implementing a curfew and increasing the number of police officers patrolling the streets is a tactic to effectively silence the voices raised in protest against the abuse of power and looting of Black and colored bodies by members of the police. This move will only serve to increase Black and Latino arrests and fines as New Yorkers continue to protest.”

New York Council Member Laurie Cumbo joined the fray stating that while she doesn’t condone the destruction of property she wants police department to “acknowledged that those of its members who lack discipline and frequently do violence to us also endanger the lives of their own colleagues.”

The New Sanctuary Coalition, a group that helps the undocumented, called the curfew “authoritarian” and labeled the police “an army onto itself.”

Several examples of extrajudicial action by the police were displayed this past weekend. Louisville Metro Police officers shot and killed BBQ restaurant owner David “Yaya” McAfee as they and the National Guard were dispersing protesters. According to the police, they were retuning fire after being shot at by protesters. Local elected officials demanded to see the body cam footage of the incident, but Louisville Mayor Greg Fischer said that none of the police involved had their body cams on. Fischer also fired Police Chief Steve Conrad after the shooting. Organizers in Louisville were protesting the death of Breonna Taylor, who was shot several times as police raided her home to serve a search warrant.

LMPD Officer Katie Crews, one of the officers involved in the shooting, took to social media earlier to mock another protester shot by pepper balls. “I hope the pepper balls that she got lit up with a little later on hurt,” said Crews on Facebook. The police department placed Crews on administrative reassignment.

Community Service Society’s reminded the world that the actions of the police and the treatment of Black and Brown people across America in 2020 are an extension of the treatment the groups have received since the nation’s formation.

“If the COVID-19 pandemic made clear the inherent inequities of our healthcare system––24,000 Blacks dead out of 103,000 total deaths––then the killing of Mr. Floyd reminded us that this nation still has not reckoned with generations of systemic racism and the seeds it has sown: indifference, greed, white male dominance and the systemic exclusion of those who do not fit into the accepted American profile,” concluded their statement.