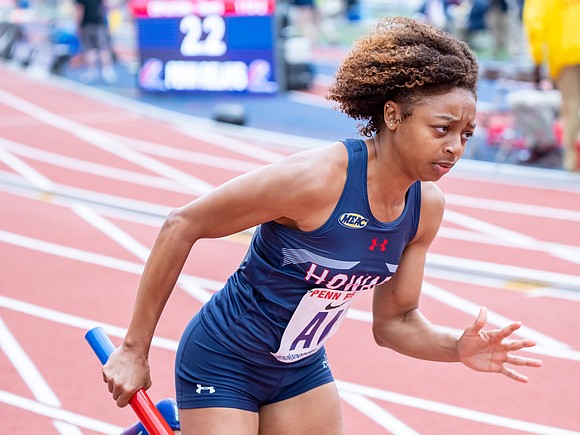 An impressive 24 student-athletes from Howard University were named to the Mid-Eastern Athletic Conference’s recently announced Track & Field All-Academic Team. Among those honored were several people with New York and New Jersey roots.

New Jersey-born junior Ameenah Saalih called herself a homebody, so she doesn’t mind being home with family. A former gymnast who turned to track and field in her senior year of high school, she likes the thrill of sprinting. “You can see your competition right there,” she said. “For me, the relays are the most fun part of track.”

A criminology major, Saalih is trying to add a second major in biology. Her goal is to work in the forensic sciences, specifically blood spatter analysis. “I’ve been balancing sports and academics since I was six,” she said. “I usually make sure I do as much schoolwork as I can before we go to meets.”

Sophomore thrower Michael Codrington is back in Brooklyn with his family. “The biggest gift is time, and this is the longest I’ve been home since I was 14 years old,” he said. His sister is home from boarding school and his brother home from SUNY Binghamton, so it’s a busy house.

Codrington participated in Prep for Prep, a program for gifted minority kids, and graduated from Phillips Academy Andover (in Massachusetts), where he played football, lettering for three years. One of the football coaches introduced Codrington to throwing the shot put, discus and hammer, which translate to football.

“I saw it as an opportunity to get better at football,” said Codrington. “Senior year was my biggest year. I ended up coming in second in discus in our regional championship.”

In choosing college, he received interest from football programs at Division III schools, but preferred to focus on academics and walk on to a team (Howard is Division I). He takes part in all the different throwing disciplines—shot put, hammer, discus and weight—and is determined to break Howard records before he graduates. “We have a very solid thrower group,” said Codrington.

An English major, Codrington chose Howard for its legacy of great writers, including Toni Morrison and Stokely Carmichael. “I had a chance to visit Howard when I was in seventh grade,” he said. “Just seeing all these Black people from everywhere in the same place expressing and being themselves in the nation’s capital was an incredible thing to see.”

After he was accepted, he emailed the coaches of football and track about being a walk-on. Director for track and field David Oliver invited Codrington into his office the first week of freshman year and spoke to him about earning his spot, which inspired him. “It was a perfect fit,” said Codrington.