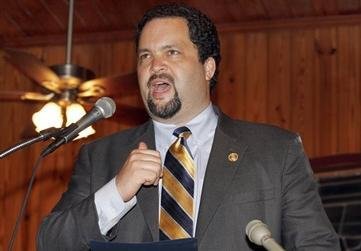 The boards of directors of People For the American Way and People For the American Way Foundation are honored to announce that Benjamin Todd Jealous has been selected as the next president of both organizations. Jealous will take office on June 15. He succeeds Michael Keegan, who has served as president of the organizations for 11 years and will continue to serve as a member of both boards.

Over the last decade, PFAW donations grew by more than 50%, the number of individual donors doubled, and the number of activists who call themselves PFAW members grew threefold. The organization has won key political victories, expanded its programs to nurture the next generation of progressive leaders, brought fresh awareness to the dangerous increase in far-right influence and influencers, and helped bring issues including democracy reform and federal judicial nominations to the fore.

Jealous brings to the organization decades of experience as a leader, coalition builder and campaigner for social justice, and the ability to combine the heart and soul of an organizer with the change-making skills of a seasoned nonprofit executive. In 2008, he was chosen as the youngest-ever president and CEO of the NAACP. During his tenure, he doubled the organization’s budget, grew its online activist base by hundreds of thousands and increased its number of donors eightfold, from 16,000 to 132,000. He also positioned the organization at the forefront of critical social justice issues such as the Trayvon Martin case, the fight against Voter ID laws and major protests over the New York Police Department's stop-and-frisk policies. He pushed for the organization to fight more aggressively for marriage equality, led efforts to register 374,000 voters and mobilize 1.2 million new voters to the polls, and worked to pass key legislative accomplishments during President Obama's first term, most notably the Affordable Care Act. In 2013, the Baltimore Sun named Jealous “Marylander of the Year” for his work on marriage equality, abolishing the death penalty and passing the DREAM Act. Jealous was the 2018 Democratic nominee for governor of Maryland, and most recently served as a partner at Kapor Capital. He is a graduate of Columbia University and Oxford, where he was a Rhodes Scholar, and he has taught at Princeton and the University of Pennsylvania.

“Michael Keegan has been a visionary political leader at People For the American Way, investing strategically in key states and constituencies. At a time when so much is riding on Americans’ engagement in the political process, I am thrilled that we are passing the baton to Ben Jealous, who has a clear vision of what we’re fighting for and how to move us forward,” said Lara Bergthold, chair of the board of People For the American Way.

“Michael Keegan has led a transformed and transforming People For the American Way Foundation, one that is raising up and supporting progressive leaders who reflect the best of all of us. Ben Jealous embodies leadership that is committed to a more just and equitable America. We have been colleagues in the struggle and I am grateful to now have him as a colleague at People For,” said Rev. Timothy McDonald, chair of the board of People For the American Way Foundation.

“I am thrilled to be joining PFAW at this critical moment, when the people of our nation urgently need change,” said Ben Jealous, president-elect of People For the American Way and People For the American Way Foundation. “We are facing critical elections this fall. The pandemic has highlighted the necessity of finishing the work of MLK, Barbara Jordan and FDR. And the rising generation in America has made clear that we must finally and fully reform the relationship between police and our communities. I’m honored to build on PFAW’s long tradition of multiracial organizing and defending freedom, opportunity, justice and equality. With the support of our great members, staff, and board, we will win the fights we must win.”

Jealous will assume leadership of PFAW/PFAWF following an extensive nationwide search for a visionary leader to continue the organizations’ trajectory of success. Jealous’ selection comes at one of the most challenging moments in our nation’s history, as we confront the need to address the systemic racism that infects our nation, fight a global pandemic that disproportionately affects communities that have been historically marginalized, and prepare for the most consequential election of our lifetimes.