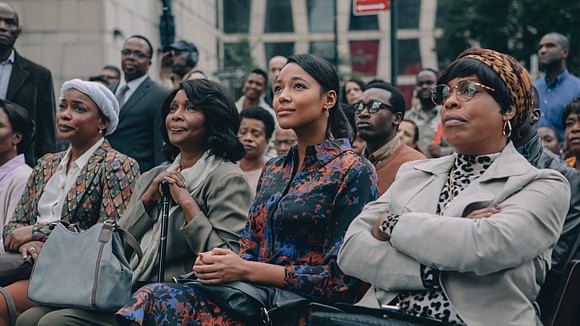 "When They See Us" Netflix photo

“Hello, my sister” is how visionary Ava DuVernay greeted me, years ago, while standing in an elevator in New York City, while her makeup was being put on by her makeup artist. It was her lips—can you imagine? She took the time to greet me while lipstick was being applied to her lips.

DuVernay started her career as a unit publicist (IATSE Local 600) like myself before stepping, full force, into creating a legacy with consistent impact. Her talents grow and grow, as does my admiration.

DuVernay gets things done. To wit, her multi-platform media company and arts collective ARRAY just announced the launch of ARRAY 101, a new online education initiative delivering dynamic social impact learning guides for the company’s films and television series. ARRAY 101 expands the company’s mission to amplify storytelling by Black artists, people of color, and women directors of all kinds and recently launched on May 28.

In partnership with Participant, the first ARRAY 101 learning companion will center on the Emmy-winning series “When They See Us,” which chronicles the wrongful arrest and incarceration of a group of young people known as The Central Park Five. The guide was produced to deepen the conversation and impact around social justice themes, inspire personal action for viewers, and to innovate within the intersection of education and entertainment. Designed for students in grades 9 and above, the learning companion includes an interactive section featuring eight project-based field study lessons that invite students to create news stories around the Exonerated Five case using public data analysis. This field study was developed in partnership with XQ Institute.

“We’re thrilled to partner with Participant to launch our first ARRAY 101 learning companion, which expands on themes and topics in “When They See Us.” I firmly believe that there must be a stronger bridge between what our industry produces and real teachers in classrooms,” said DuVernay, creator, co-writer, and director of “When They See Us” and founder of ARRAY. “The first broadcast anniversary of the series was the ideal time to release this social impact learning supplement and kick-off ARRAY’s upcoming study guide initiative overall.”

“‘When They See Us’ shines a timely and important light on the many challenges and pitfalls of the criminal justice system, which are heightened even more by COVID-19,” said David Linde, CEO of Participant. “We are proud to partner with Ava DuVernay and ARRAY on the ‘When They See Us’ Learning Companion to educate the public, building from the power of an artist’s original voice, about the state of criminal justice reform and offer students, advocates, and organizations resources to take action.”

Beginning May 28, the “When They See Us” Learning Companion will be available to educators, students, organizations, and the general public free of charge, via download from ARRAY 101 and Participant.

The guide’s release aligns with the first anniversary of the series’ debut on Netflix on May 31, 2019. DuVernay will reflect on the series with an @AVA Instagram Live Watch event on Sunday, May 31, at 5 p.m. PT/8 p.m. ET.

Additionally, Participant and Color of Change are relaunching the Winning Justice platform, which will provide resources for communities to learn about their specific local prosecutors’ stances on a range of relevant policy issues and take action.

Learning companion guides for ARRAY will center on films “Burning Cane,” “Jezebel,” “They’ve Gotta Have Us,” and “The Body Remembers When the World Broke Open,” which will be released in the coming months.

About “When They See Us”

“When They See Us” was created and directed by Ava DuVernay, who also co-wrote all the four parts. Jeff Skoll and Jonathan King from Participant, Oprah Winfrey from Harpo Films, and Jane Rosenthal, Berry Welsh, and Robert De Niro from Tribeca Productions executive produced the limited series alongside DuVernay through her production company, ARRAY Filmworks.