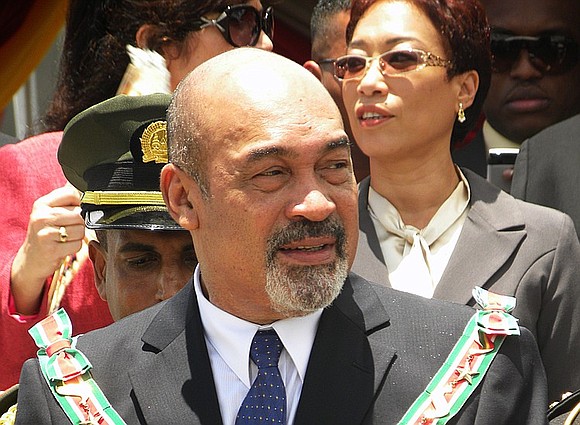 On Wednesday, Jan. 22, Pres. Desi Bouterse of Suriname will appear before a war tribunal court for the very first time to lead in a defense against a conviction of mass murder, linked to the Dec. 1982 deaths of 15 opposition professionals who were executed while he was the country’s military strongman.

A court in the Dutch-speaking Caribbean Community late last year sentenced the head of state to 20 years in prison for ordering the executions of the 15 for allegedly plotting a counter coup to his Feb. 1980 overthrow of the then-elected government.

The sentence came five months before the country votes for a new government on May 25. Bouterse’s National Democratic Party (NDP), seeking a third consecutive five year term, has blamed the timing of his sentence on a panel of judges, who it says, are determined to damage and sabotage his chances for reelection. That’s the belief of the NDP.

So the party has called out thousands of its supporters to assemble outside the court to give support to Bouterse, 74, while he stands in the dock before the panel. The case against him and 24 other suspects, had been going on for more than a decade. Bouterse, a former army sergeant who had staged the coup in 1980, had only shown contempt for the proceedings and had opted to stay away from sessions––he was only represented by his legal team.

But now that the sentence has been handed down, Bouterse is compelled to attend court because his lawyer, Irwin Kanhai has given notice of appeal against the sentence. This means that the accused must attend court if he is to appeal and or to protest the decision of the judges. The verdict had sent regional academics into a frenzy as they researched whether any sitting head of state in the bloc of 15 nations had been convicted and sentenced while in office.

Opposition parties and leaders have roundly criticized the NDP for mobilizing its supporters to attend the court, saying it is a clear effort to intimidate the judges even though they have withstood the withering criticisms over the years and had proceeded with their work.

The 15 were killed at a downtown colonial era Dutch fort that is ironically just next door to the cabinet and presidential office. Bullet holes in the walls are still visible today.

The group had included four journalists, academics, labor leaders and clergymen, all accused of cozying up with the west to overturn the 1980 coup that had included grievances such as soldiers demanding to be represented by a labor union. Bouterse has denied ever giving any order to execute the group but has admitted political responsibility as the then head of state and government.

One benefit of turning up before the court is that this phase could be dragged out for years to come. By then Bouterse, who underwent lifesaving surgery in Cuba recently, might have been retired. His NDP is leading in the polls and could well win a third consecutive term. They are only seriously challenged by the Hindustani VHP party. Widespread speculation is that the two could come together after May 25th as VHP businessmen are feeling the squeeze of being out of office for such a protracted period and not in a position to benefit from state contracts and other forms of largesse.