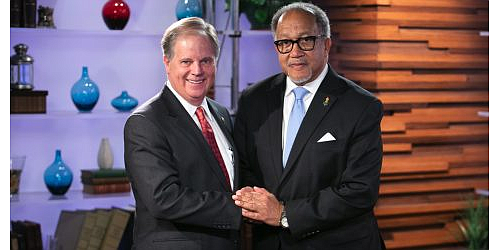 Held inside the Hart Building at the U.S. Capitol in Washington, D.C., the engaging hour-long conversation marked the first time that a sitting U.S. Senator sat down for a live-streamed video with the Black Press of America.

During the discussion, Jones said that voter turnout – particularly that of African Americans – was crucial to his stunning upset of Republican Roy Moore in the 2017 Alabama Special Election.

“The right to vote was hard fought for African Americans in this country, and I think too many people take that for granted. I think we proved that in the special election in 2017, that every vote counts,” said Jones.

Jones said voting rights had been under attack since the 2013 Shelby V. Holder decision, which eliminated a lot of voter protections.

“It’s not the same as the old Jim Crow laws, but there’s still efforts out there to suppress votes and keep people from having that free access to the booths,” he stated.

Jones noted that he’s working to restore “teeth” in the Voting Rights Act, but doubts that the current GOP-led Senate and President Trump’s administration would approve.

“I don’t see it happening, so it’s all the more important to get out and vote in the 2020 elections,” Jones stated.

Chavis asked Jones about the role Black women played in his winning election to the Senate.

“It was critical. We focused on making sure that we got the African American vote out,” Jones stated.

“We did get more African Americans as a percentage out than even when President Obama did in his first race, a fact that I was very proud. The Black community came out and worked hard. It’s community engagement; it’s a 365-days a year job. And, that’s why the Black Press is so important because it keeps the community engaged,” he stated.

“It was incredibly important. When it comes to federal dollars, there are two pots of money HBCUs get: Mandatory funding and discretionary funding,” said Jones.

“The mandatory funding is absolutely critical so they can plan each year. There’s a lot of budgetary tugs that fought us, it wasn’t easy, but we were just persistent, and that’s the key in legislation in Washington, to be persistent,” he noted.

“So we were able to get that mandatory funding so that a base amount of money would go to HBCUs. In my two years in Washington, we have been able to get about a 30 percent increase in discretionary funding for HBCUs and other minority-serving institutions.