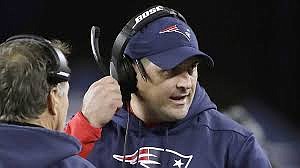 As of early yesterday morning (Wednesday), the Giants had not made a formal announcement as to who they had hired to fill their head coaching vacancy. Nevertheless, they will soon hold a press conference to introduce 38-year-old Joe Judge as the man who will replace Pat Shurmur, who was fired as the Giants’ head coach a little over two weeks ago and one day after their final game of the season, which ended with a record of 4-12, the fourth worst in the NFL.

The hire is a surprise to many who have followed the Giants’ coaching search, as Judge was not considered to be a leading candidate to land the job by observers outside of the organization. A native of Philadelphia, Judge does not have any previous experience as either a head coach, offensive coordinator, defensive coordinator or quarterbacks coach at the professional or college levels, which is usually a prerequisite to become an NFL head coach.

Native New Yorker Matt Rhule, who many speculated was at the top of the Giants’ list of candidates, did not follow through on his scheduled interview with the team and instead signed a reported seven-year, $60 million deal with the Carolina Panthers on Tuesday to become their new head coach. The 44-year-old Rhule had been the head coach at Baylor University for the past three seasons. He was the Giants’ assistant offensive line coach for their 2012 Super Bowl winning team under Tom Coughlin.

The perception among a plethora of fans and media is Judge became the Giants’ default choice after their top two candidates, Rhule and Mike McCarthy, who took the Dallas Cowboys’ head coaching job earlier this week, spurned the Giants.

Judge will be the franchise’s 21st head coach since their founding in 1925. As the fourth oldest franchise in the NFL, behind the Arizona Cardinals, who were originally established as the Chicago Cardinals in 1898, the Chicago Bears (1920) and the Green Bay Packers (1919), the Giants have yet to have a Black head coach.They adhered to the Rooney Rule by interviewing Bieniemy and Richard.

The rule was named after Dan Rooney, the late Pittsburgh Steelers chairman, former head of the NFL’s diversity committee, and United States ambassador to Ireland from 2009 to 2012 as appointed by former President Barack Obama. The policy was established in 2003 for head coaches and expanded in 2009 to include high level front office positions such as general manager, and mandates that a team must interview a minimum of one ethnic-minority candidate for a respective job opening.

The efficacy of the Rooney Rule is dubious and is the subject of intense ongoing debate as currently there are only four head coaches of color of the 32 NFL teams: Ron Rivera, the former Panthers head coach who was hired by Washington last week; longtime Steelers head coach Mike Tomlin; Brownsville, Brooklyn product Brian Flores, who just completed his first year as head coach of the Miami Dolphins; and Anthony Lynn, who has been the head coach of the Los Angeles Chargers since 2017.