Celebrating the life of Freedum Allah a.k.a. Popa Wu 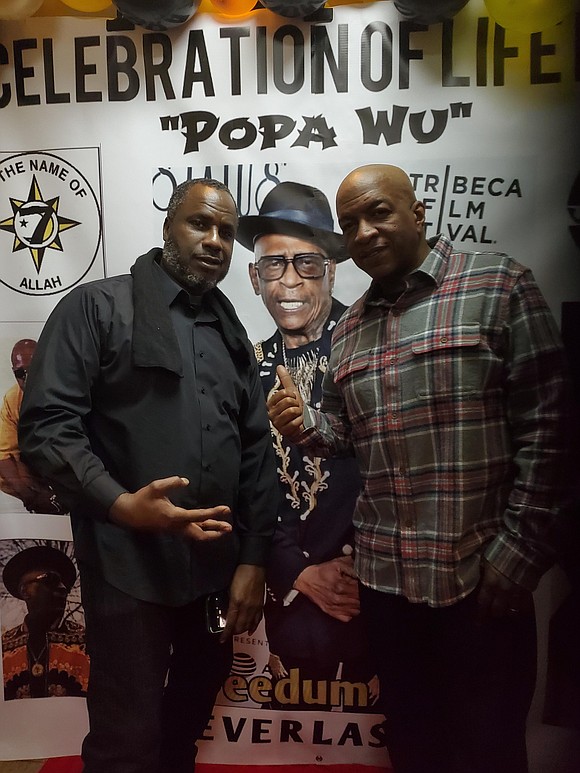 Hundreds packed into Brooklyn’s Restoration Plaza [1368 Fulton St.] Friday evening, Dec. 20, to memorialize fallen Wu-Tang Clan patriarch Freedum Allah-63, a.k.a. Popa Wu, who passed that previous Monday. A more tight-knit ceremony was conducted Sunday at Brownsville’s Allah School In Medina [318 Livonia Ave.]. Many associates, fans, friends and relatives attended the going home services. No cause of death was revealed, and being that his body was promptly cremated, there was no viewing.

Friday’s location was most appropriate being that the Coney Island-native honed his musical skills at the recording studio in Bed-Stuy’s Restoration Plaza during the 1980s, prior to Wu-Tang’s emergence in the early-’90s. There, he also aligned with Sonny Abubadika Carson, Ali Lamont, Atiim Ferguson, and Rasheem Allah.

Cappadonna, The Gza, Masta Killah, The Sunz Of Man and other Wu affiliates were among the Clan conglomerates in attendance.

Group photos of his children and grandchildren were taken before the ceremonial part of the program officially began.

“I’d like to thank everyone for coming out and showing my father love. It really broke me down to see everyone here for him, and I respect every one of y’all,” commented his teary-eyed daughter.

His sister added: “He brought everyone out [today] and everyone here loved him. We really don’t have enough room for everyone, that’s how much he was loved.”

Granddaughter Destiny, urged, “Don’t let death be the reason it takes everyone comes out. We gotta come together cuz tomorrow’s not promised.”

Freedum’s son-in-law noted: “He was well loved. Every time you saw him, there was a lesson, always a teacher. He was like a father, he raised me for 20-years. He was a powerful man and didn’t take no ish.”

Next up, his niece described his two-step during family get-togethers, before saying, “He was always the life of the party. I learned a lot from my uncle, and he taught my sons a lot. I’m gonna miss him so much.”

Then his communal family added-on to the cipher.

Medina’s First Born son, Hashiem, explained, “We’re not connected on no Christian-level, we’re the Gods & Earths, a universal family.” Before recalling how “Freedum always wanted to take a portrait of his 20 seeds [children] together. And tonight that happened.”

Cappadonna recalled a 3-day drive they took with several other Gods to Arizona “buildin’ all the way,” before saying “I didn’t wait ’til now to give him his roses. It ain’t nothing to stop by and see your brother. Take the time out to visit your people, because we only have a short time here and nobody knows when you’re going.”

Queen Earthly Embrace noted how, “He’d get riled up and I’d tell him to ‘stop letting them get you like that,’ and he’d say ‘Ok. I’m gonna listen to you.’ A lot of people would say he was wilding out. Yeah, that was his energy, that’s how he was. He’s from Medina, and that’s how we do.”

His son called up his mother, Freedum’s Earth, who was greeted with a resounding “Peace!” by the overflowing crowd. They then concluded the evening by singing The Five Percenter’s anthem, “The Enlightener.”