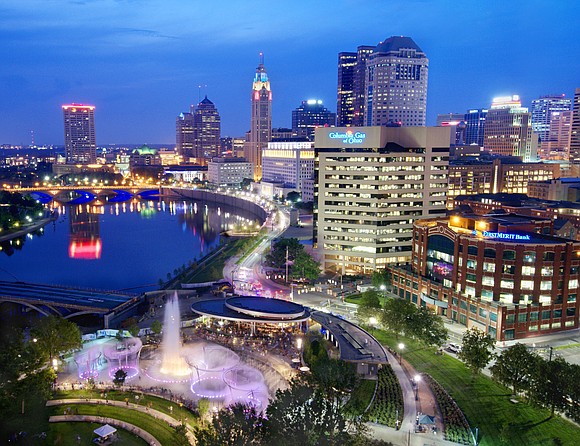 Maybe you have an image in your head about Columbus, or maybe it’s so unfamiliar that you have none. Well, chances are, whatever you think you know is not quite right. Folks tend to underestimate this midwestern city. But those in the know haven’t missed the buzz around Columbus. Afterall, it is one of the hottest real estate markets in the U.S. People are leaving both coasts and calling The Arch City their new home. Columbus just surpassed San Francisco in population.

Maybe it’s time for a trip to find out what all the fuss is about.

Start downtown. Make your way through more than 100 restaurants, bars and coffee shops. The

Battelle Riverfront Park is four acres of greenery with trails, monuments, memorials and special events such as the Columbus Food & Wine Festival. Then there’s Bicentennial Park and the Scioto Mile, with its walking and hiking trails that wind through green space on the riverfront. You’ll find the restaurant Milestone 229, an ideal spot for what the sunset with cocktail and kids at play in the Scioto Mile Fountain. Nightfall ups the wow factor as the fountain lighting and fog effects come into play.

In 2018, a new landmark was added to the downtown landscape, the National Veterans Memorial and Museum. The building itself is a marvel. Construction required 28 million pounds of concrete, 500 tons of structural steel and over 1,100 tons of reinforcing steel. But what touches you more is what’s inside, the stories of veterans, capturing their journey from leaving home, basic training, combat and coming home. The museum honors the more than 40 million Americans who served the nation since its founding. Along with giving honor where due, the museum’s goals are to connect, inspire and educate. It does that and more. It’s hard not to feel sentimental as you walk through the exhibits, many of them interactive, the Remembrance Gallery and Rooftop Sanctuary. Veterans are invited to share their story in a recording booth on the lower level.

One of the most popular places to stay is Hotel LeVeque in the heart of downtown. This historic, boutique art deco hotel is housed in the LeVeque Tower and stylishly combines the past with the present in its elegant design.

Much as downtown is hot diggity, Columbus is also about neighborhoods. One favorite is the Short North Arts District may as well be hip Williamsburg or Soho in New York. It’s cool like that. The main drag is High Street, blocks and blocks of restaurants, bars, coffee spots, galleries, boutiques with vintage goods and one-of-kind finds, bookstores, and places like The Candle Lab where you design your own scent and pour a personalized candle that’s all yours. Come thirsty, there’s a homegrown meadery, vintner and distillery. Chill out at Goodale, Poplar and Italian Village parks. You could never leave the district and have all you need for an awesome vacation.

On the edge of downtown is the Short North is the North Market. Spend time winding your way through 35 small businesses offering, arts and crafts, Bavarian pretzels, oils and vinegars, spices, cookware, flowers, ice cream, you name it. The ever-popular Hot Chicken Takeover restaurant is one of several eateries.

Just south of downtown is another gem, German Village. This is a must-see for architecture buffs. Make your way down Mohawk, Deshler and Beck Streets for some of area’s stunning homes. You’ll get that German flavor at places like Schmidt’s Sausage Haus and there’s plenty good eats elsewhere in the district like Barcelona, where the vibe is lively, service great and the Spanish paella and tapas make you want to go to Spain.

To get lost in mother nature you can do just that at the Franklin Park Conservatory and Botanical Gardens. Or drive about an hour for an overnighter in Hocking Hills. Stay at the Inn & Spa at Cedar Falls. Hocking Hills State Park is home to Old Man’s and Ash Caves, waterfalls, trails and much natural beauty. Stargazers will fancy the John Glen Astronomy Park.

So if someone gives you a crazy look when you say you’re going to Columbus for vacation, don’t open your mouth to explain. Remember that Proverb about not talking to fools.