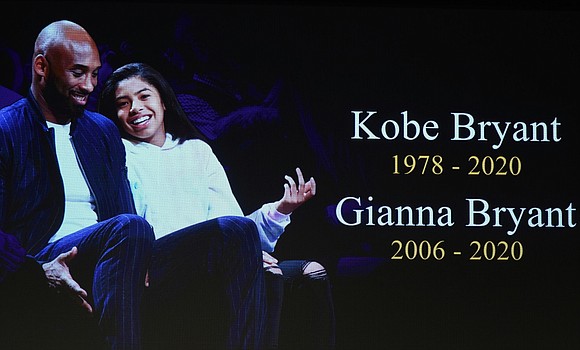 Kobe Bryant and his 13-year-old daughter Gianna were laid to rest in a private funeral service in Orange County, California on Friday, February 7, 2020, according to his death certificate released Tuesday by Los Angeles County officials. Per the document, the funeral service was held at Pacific View Memorial Park in Corona Del Mar, California. This comes on the heels of the first issued statements, via social media, of respective wife and mother of the pair, Vanessa Bryant, who revealed a peek into her splintered spirit with the telling remarks, “It’s like I’m trying to process Kobe being gone but my body refuses to accept my Gigi will never come back to me. It feels wrong. Why should I be able to wake up another day when my baby girl isn’t being able to have that opportunity?! I’m so mad. She had so much life to live. Then I realize I need to be strong and be here for my 3 daughters. Mad I’m not with Kobe and Gigi but thankful I’m here with Natalia, Bianka and Capri.”

The emotional roller coaster of the family now shifts to the public memorial service planned for February 24 at the Staples Center. February, the second month of the calendar year, represents Gianna’s No. 2 jersey at the Mamba Sports Academy; 24 aligns with one of Kobe Bryant’s two retired Jersey numbers for the Los Angeles Lakers. On an episode of the podcast “Knuckleheads” with Quentin Richardson and Darius Miles, Bryant offered insight into the number he wore in the latter half of his career. “Twenty-four was the first number I wore in high school; my freshmen year it was 24. Philosophically for me it had significance because it was about approaching everyday as if it was my last, and I had to have that mentality because of the shift. Now Shaq’s gone and I have to drive this team every day. I looked at that number and it was like today’s the most important day—that’s it. That helped me stay locked in.”

Much like the way he lived, attention was paid to the minute particulars. That quality was not missed by those who admired him. Inspirational/gospel recording artist Isaac Carree counts among that throng. Says Carree, “Kobe was my favorite player! His work ethic and his dedication to not just the game but to the details of the game were unmatched. His will to win and the killer instinct he had drove people to love him or love to hate him!”

“Love him or hate him” in most cases is not a literal statement. The hate and vitriol regarding the death of Bryant is very real. Skeletons that weren’t even in the closet were unearthed hours after his demise and one particular voice’s deeds and actions cut deep. Iconic rapper Snoop Dogg responded with a ferocity to those actions and now he’s under the gun. For coming to the man? Somehow that’s not surprising. Once hip-hop is involved rationale is disregarded even if there’s pain and justification to his retort. Here’s what Snoop knows that many don’t. If we had to choose the athletic manifestation of hip-hop culture the game of basketball would probably eke out boxing as the selection. While it hasn’t supplanted the dreams of urban youth, hip-hop has become a welcomed supplement as a means of creative expression and if you’re among the rarest of the rare, an escape. Although it has predated the existence of hip-hop culture, the two are now intertwined.