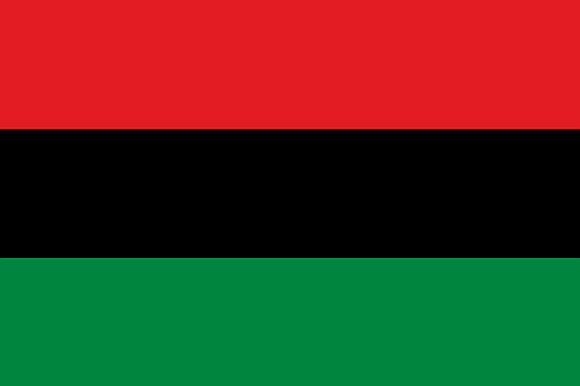 In commemoration of Black History Month, municipalities in several cities have approved resolutions to erect the red, black and green Pan African flags at prominent places in their local areas throughout each February. In recent years St. Louis, Mo.; Richmond, Va.; Toledo, Ohio; and Boston have participated in the month-long commemorations.

St. Louis set the trend in 2014 when the RBG flag had been previously approved and flew that February. Then in 2018 Boston did the same, as Richmond and Toledo followed suit last year.

They all chose to legally raise the Black liberation flag for Black History Month—in many cases at City Hall after the reading of the resolution—in honor of the many historical achievements African Americans have made throughout the centuries.

In some cases the RBG banner was hung just below the United States’ flag, or local municipal ones already in place, while in certain instances it replaced them, only throughout February though.

“The flag is about education,” Lewis Reed, president of St. Louis’ Board of Aldermen, explained. “One of the many problems African Americans face is we see our history rewritten.”

During several of the ceremonies the Black National Anthem “Lift Every Voice and Sing” was sung while the flag was strung along the pole. It has been a symbol of solidarity throughout the African diaspora representing pride and unity since the 1920s when Marcus Garvey’s Universal Negro Improvement Association created it.

“These efforts are done to re-instill the fierce pride which has been stripped away after enduring centuries of psychological, physical, as well as spiritual slavery,” noted social critic La Meh Nua. “Our sovereign colors have meaning. The red represents our blood, the black symbolizes our skin, and the green is for our nourishing Motherland.”

NAACP Toledo Chapter President Ray Woods explained, “Flags make a difference. Not just here in this community, but around the world. Not just now, but forever. What those flags symbolize is a sense of pride and a sense of respect.”

He added, “This isn’t just an African American thing. This is a thing for all of our people worldwide. We must acknowledge that we are all interconnected throughout the African diaspora. Not only has this flag been adopted by nations, it has been used to represent thousands of Black organizers that carry on the struggle for a nation of our own.”