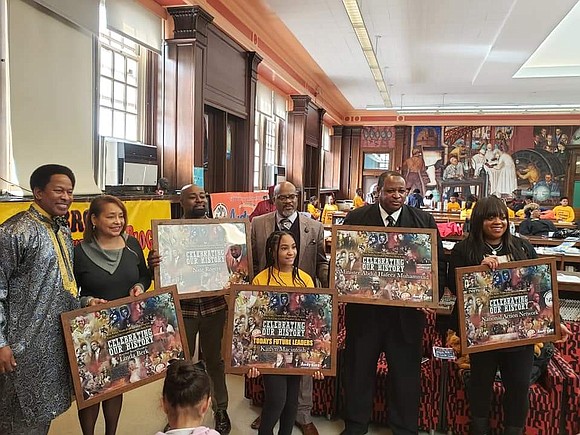 To kick off Black History Month at Evander Childs Educational Campus, Council Member Andy King hosted his annual “Celebrating Our History" event with The Bronx Youth Empowerment Program. In a library surrounded with murals depicting different periods of history including the enslavement Africans in America, hundreds of students from the Bronx gathered to learn about Black history. At the event, King honored five individuals who represent the power of their Black history. The honorees were Linda Berk, president of the Riverbay Board of Directors; the Rev. Al Sharpton, founder of the National Action Network; Nate Rodgers from Chasing News; ‘Council Girl’ and future leader Kaitlyn Macintosh; and Minister Abdul Hafeez Muhammad of Mosque No. 7. The Bronx Youth Empowerment Program spread some knowledge and performed a poem called “What If There Were No Black People in the World,” sharing how depleted the world would be without African Americans. As Black History Month begins, King reminds everyone to be proud of where they come from, and that Black history month is every month, not just in February.