Ruben Wills wants his time back, claims he was wronged 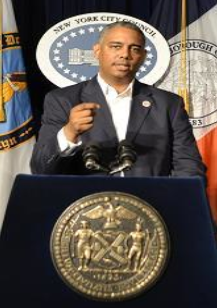 If you go to former New York City Council Member Ruben Wills’ Twitter page, you’d assume that he’s been active on the app for the past decade like many people. He recently retweeted New York City mayoral candidate Ray McGuire’s video, which was directed by Spike Lee. Wills is in favor of legalizing marijuana, celebrated Rosa Parks’ recent birthday and honored the death of former New York City Mayor David Dinkins. He uses gifs to react to tweets like everyone else. Wills, however, isn’t just tweeting. Wills, who was released from parole this past September after being released from prison last August, wants to clear his name and believes he was wronged.

“Conflict,” Wills said when describing the past decade of his life. “I’m conflicted because I’m very grateful for those who helped me, but I have a lot of resentment for it even happening.

“It’s been hell,” continued Wills, who represented southeastern Queens during his City Council reign. “But I’ve been fortunate to have a strong support system.”

Wills’ problem began more than a decade ago when he said, while waiting for a state grant, he paid out of pocket for promotional events for the non-profit organization “NY 4 Life.” Once he was granted the money, Wills used that to reimburse what he paid for the events.

Wills was accused, however, of using the state grant money ($30,000) for personal use.

Sitting with his lawyer Jonathan Edelstein, Wills denied this.

Schneiderman and New York State Comptroller Thomas DiNapoli said that Wills used some of the money to buy a Louis Vuitton bag and terry cloth slippers.

“Ruben Wills stole money meant to benefit the community he was sworn to serve,” said DiNapoli at the time.

In 2017, Wills was found guilty on five out of six corruption charges. The court ordered him to pay $11,500 in restitution to the New York City Campaign Finance Board, $21,374 to the New York State Office of Children and Family Services and a $5,000 fine.

Wills said he served his time in many facilities, including the Marcy, Downstate and Sing Sing correctional facilities and Lincoln Correctional Facility on work release.

Wills said that he underwent multiple surgeries as a result of a routine medical visit in 2016 that went awry. The timeline of events left him wheelchair-bound. He wouldn’t disclose where and what doctors worked on him for his surgeries. But he did tell the AmNews that he didn’t stop working.  “I had like four surgeries,” said Wills. “It made me miss a lot of time at the City Council. I was actually doing work from the hospital bed.”

Wills missed 69 City Council meetings during a six-month time period. He said he received assistance from elected officials and social activists so he could serve his time in better conditions. He named people such as current New York City Public Advocate Jumaane Williams and Tamika Mallory for helping him.

Both Williams and Mallory didn’t respond to the AmNews’ requests for comment.

In 2017, Wills sued the city for $10 million claiming mistreatment on Rikers Island and in Vernon Bain Center in the Bronx. He claimed he was denied his medication and was left in such severe pain that he couldn’t walk for several months. The lawsuit was met with silence.

Last year, leaked documents revealed that 2,000 state prisoners were the victims of false positive drug tests “which happened to a lot of people,” said Wills’ lawyer Johnathan Edelstein. He implied that his client was one of the 2,000 affected by the false positives.

“I was out on work release and they re-incarcerated me [because of the positive test],” Wills said. “I was denied visits.”

But no matter the circumstances behind his prison sentence or the martyrdom role Wills might play, he’s just happy to be back.

“It’s not an isolated story,” said Wills of his prison stay, pointing out the conditions inmates live under. “But I went through this for a reason.”