Zimbabwe to pay white farmers for lands taken under Mugabe 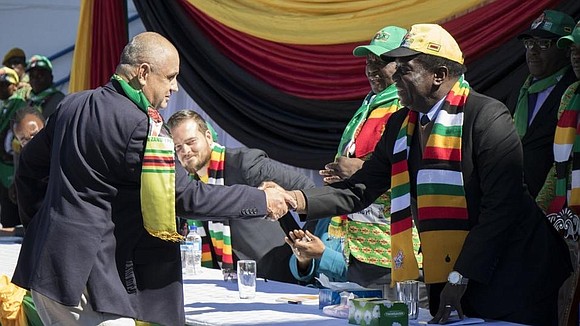 “The compensation of land is a settled issue, and we are not revisiting it.”

Those were the words of government spokesman Nick Mangwana defending a $3.5 billion agreement to compensate white farmers whose properties [contested by now late President Robert Mugabe] were confiscated by his regime and then redistributed to the majority Black population left landless by British colonial policies.

According to the [controversial] agreement just signed at Pres. Emmerson Mnangagwa’s State House offices in Harare, white farmers would be compensated only for infrastructure on the farms and not the land itself, as per the national constitution.

“If we say we are paying for the land––which we are not going to do––no government will stay in power because the people don’t want to pay for colonialism,” Mangwana added.

Neither will the southern African nation be cutting checks for white farmers at this time. Money will have to be borrowed from international donors and lenders, according to the agreement signed by Pres. Mnangagwa.

Farmers will receive 50% of the compensation after a year and the balance within five years.

With western sanctions imposed, and major European opposition, two decades ago, Zimbabwe was thrown into chaos after Pres. Robert Mugabe launched a controversial land reform program where thousands of white farmers were evicted from their several farms, between 2000 and 2001. Mugabe observers determined that the seizures caused the deterioration of Zimbabwe’s economy, and ruined relations with the West.

Western countries rallied around the white farmers and made total compensation to them one of the key conditions for the lifting of painful sanctions still in force despite the COVID-19 pandemic.

Little was said, however, about the unfulfilled obligations of the Lancaster House Agreement in which then U.S. Pres. Jimmy Carter and the United Kingdom pledged to help fund an equitable land redistribution program.

In 1997, when Tony Blair and the New Labor Party came to power, the Lancaster agreement was essentially scrapped.

Mugabe’s Western nation and white farmer hated Land Reform policy, was his effort to reclaim land taken from Africans with no compensation, permission or agreement.