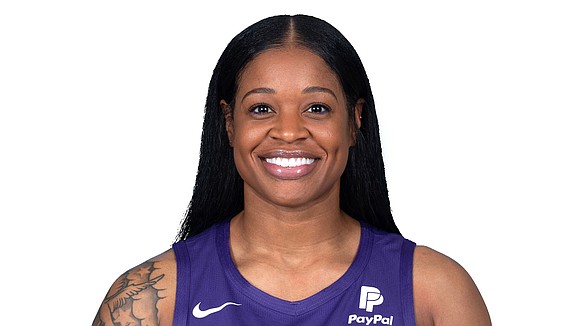 Bronx native Kia Vaughn has settled into life in the WNBA bubble, or as some people are calling it, the “wubble.” The veteran pro, now in her 11th WNBA season, admitted she’d like to be with loved ones during these tumultuous times, but she has no complaints about life at IMG Academy in Bradenton, Florida.

After taking the 2019 WNBA season off to rest her body after a decade of year-round play, this summer Vaughn is a member of the Phoenix Mercury. “I played well overseas,” said Vaughn, who played for the New York Liberty from 2009–12 and 2017–18.

Her most recent overseas stint was in Turkey, where she experienced an earthquake in January that sent her home to the U.S. for a couple of weeks. The COVID-19 pandemic erupted not long after her return to Turkey, and thankfully she was able to get back home, where she stayed in shape while awaiting the start of WNBA season.

“Being a Black female, having to support my family and living in the world that we live in today, being able to find true freedom in what I’m allowed to do…kept me going while quarantined,” said Vaughn. “That kept me motivated.”

This WNBA season is devoted to social justice issues, and Vaughn is proud to wear the name of Breonna Taylor on her uniform. As a 6-foot-4 Black woman, Vaughn voiced concern that someone may incorrectly perceive her as being a threat. “I would hate to put fear in anyone’s heart,” she said. “It’s a day-to-day challenge.”

On Sunday the Mercury handed the Liberty a 96–66 defeat. Vaughn is getting into the groove with her new teammates. “We discuss what’s happening in the real world and how it affects us and our family members,” she said. “It’s a lot more real. You get to see athletes that you usually don’t see until game-time.”

Vaughn said she’s dropped her normally hypercompetitive persona and talks to people on opposing teams whenever she runs into someone. There is a sense of unity and shared purpose. She even wants to hug other players and only holds back due to health concerns. “I would love to talk to everyone and see how they’re doing mentally,” she said.

The Liberty are 0–4 to start the season. Top draft pick Sabrina Ionescu suffered a sprained ankle during the game against the Atlanta Dream. The Liberty play the Washington Mystics on Friday evening, Aug. 7.