Thibodeau and the Knicks reunite for a new start 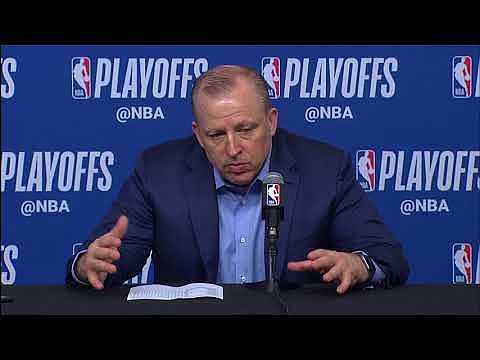 If at first you don’t succeed, try and try and try again. And then try some more. Such has been a recurring theme for the Knicks over the past two decades.

The hiring of Tom Thibodeau as their new head coach is an extension of the franchise endeavoring to establish what for them has been an elusive foundation on which to build.

They haven’t made the playoffs since the 2012-2013 season under former head coach Mike Woodson, and Thibodeau is now the 14th person, including interim coaches, to hold the position since the 2000-2001 campaign. Think about it, 14 head coaches, counting Herb Williams only once although he had two interim stints. It is the epitome of instability.

Before the novel coronavirus postponed the NBA season in March, the Knicks were 21-45 and the 12th seed in the Eastern Conference, precluding them from being one of the 22 teams receiving an invitation to continue playing when the league restarted last week.

The executive offices have also seen doors constantly revolving over the past 20 years or so. New Knicks president Leon Rose, who replaced Steve Mills, has been charged with ending what has been optically and tangibly perpetual chaos engulfing the Knicks.

“Tom Thibodeau is a proven winner who gets the most out of the players and teams that he has coached,” said Rose in a statement released by the Knicks. “He will bring leadership, accountability and a hard-working mentality to our organization. We are excited to bring him back to New York and look forward to collaborating with him and his staff toward a successful future.”

Thibodeau was a Knicks assistant coach from 1996 to 2003, so he’s acutely aware of the culture of the franchise and the challenges facing him. Thibodeau experienced several playoff years when he was on the Knicks’ bench under head coach Jeff Van Gundy.

Beginning when Rick Pitino was their head coach in the 1987-’88 season, Mark Jackson’s rookie year, the Knicks made the postseason every year until the run finally ended in 2002.

“I’m grateful for the opportunity to return to this historic franchise as head coach and work alongside a talented front office that I have great trust in and respect for,” said Thibodeau. “I know what New York is like when the Knicks are successful and there is nothing comparable. I look forward to being a part of what we are building here and can’t wait to get to work.”

Thibodeau is coming off an uneven and at times tumultuous period with the Minnesota Timberwolves. He was hired as head coach and president of basketball operations in April of 2016 and fired in January of 2019. He had excellent results coaching the Chicago Bulls from 2010 to 2015. Along his NBA head coaching journey, Thibodeau has gained the reputation, arguably unfair and unfounded, of clashing with young players and physically wearing players down.

Despite those concerns, Rose and Knicks owner James Dolan have determined Thibodeau’s strengths outweigh his flaws, and that he is the right man at this moment for what the Knicks need.