Nets get a big win in the battle for the playoffs 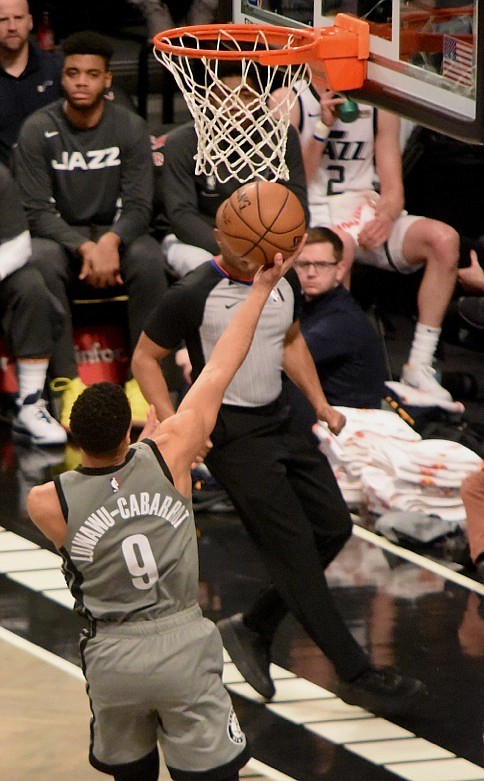 The amended NBA season has returned with a new look and effort to maintain as much normalcy as possible for fans who cannot attend the games inside the league’s bubble. They are limited to watching games on television, digitally or listening to radio broadcasts.

What NBA fans will immediately notice is the wording on the back of most of the players’ team jerseys that display a variety of social justice messages.

Black Lives Matter is written on the middle of the court, crossing the centerline above the large NBA logo.

The Nets, one of the 22 of the 30 NBA teams taking part in the league’s restart, in Orlando, Florida, have been impressive despite having many of their key players sidelined due to injuries.

Playing without Caris LeVert (thigh contusion) who scored 34 points against the Washington Wizards, Joe Harris (hamstring and back) and Jarrett Allen (listed as unusual circumstances), the Nets defeated the Eastern Conference’s top seeded Milwaukee Bucks 119-116. The win prevented the Bucks from clinching the conference’s No. 1 overall seed for the upcoming playoffs.

Led by Timothe Luwawu-Cabarrot’s career-high 26 points and Garrett Temple’s 19, Brooklyn played aggressive basketball throughout the game to defeat the Bucks, who were 19-point favorites to win. In addition to LeVert, Harris and Allen, newly signed Net Jamal Crawford suffered a thigh injury in the second quarter against the Bucks and did not return.

Uncharacteristic of their other games in the bubble, Brooklyn played a full four quarters of intense, crisp basketball. They led Milwaukee by six at the end of the first quarter and eight at the half. Milwaukee outscored Brooklyn in the second half without reigning league MVP Giannis Antetokounmpo, who sat out the last two quarters for rest.

Even without having to face Antetokounmpo for the final 24 minutes, Nets head coach Jacque Vaughn was impressed by his team’s performance, notably Luwawu-Cabarrot.

“Seems like he’s in a good rhythm,” Vaughn said of the 25-year-old, 6-foot-7 guard/forward from France. “We’ll continue to put him in positions where he can take advantage of his speed and shooting ability.”

As for Crawford’s hamstring, the Nets will be measured in their course of action.

“We’ll get him diagnosed and see what happens from there,” said Vaughn. “I’m telling you, I love having him around. It was awesome to see him on the floor tonight and I look forward to him being on the floor again.”

After facing the Boston Celtics last night (Wednesday, Aug. 5), the Nets will be on the floor again tomorrow night against the Sacramento Kings, meet up with the L.A. Clippers on Sunday, Aug. 8, and play the Orlando Magic, who they are battling for the eighth seed, on Tuesday, Aug. 11.