Netflix’s unevenly textured ‘Self Made: Inspired by the Life of C.J. Walker’ 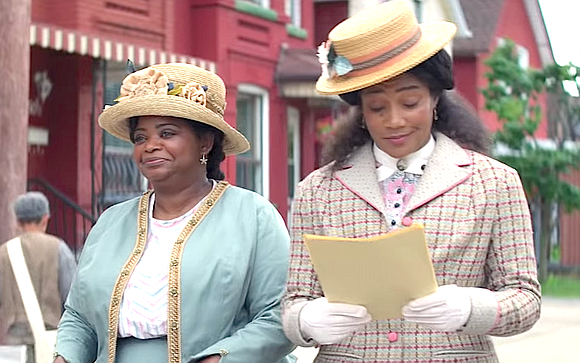 “Self Made: Inspired by the Life of Madam C.J. Walker" Netflix

Now streaming on Netflix is “Self Made: Inspired by the Life of Madam C.J. Walker,” a look at the pioneering entrepreneur, activist, and philanthropist. It’s an inspiring story that needed to be told.

“Self Made: Inspired by the Life of Madam C.J. Walker,” written by Nicole Jefferson Asher and Elle Johnson, uses Walker’s great-great-granddaughter A’Lelia Bundles’ biography. The series is directed by Kasi Lemmons and DeMane Davis, and Lemmons also serves as one of the executive producers.

There is an obvious creative choice by the team to present Madam Walker’s story in a modern way. Some of those choices fall flat while others soar, leaving a curious mix of entertainment.

Madam Walker (Octavia Spencer) is painted early as a woman with a vision. To wit, she often envisions herself in a boxing ring, a prizefighter, ready to knock out whomever and whatever might dare to stand in her way. The creative decision to mix modern music into the four episodes works sometimes, like when they decided to use L.L. Cool J’s “Mama Said Knock You Out” to underscore her boxing ring fantasy, but it can make you scratch your head in others.

Walker’s real-life rival, Annie Malone (Carmen Ejogo), brings up the delicate issue that African Americans have had since being brought, in chains, to this land, and that is about color and hair texture. One of the most piercing pieces of dialogue comes early, in act one: that Malone’s fair skin and “good hair” came about because the women in her family were raped.

It’s these two African American women—visionaries—who could not and would not join forces because of the deep-rooted hate taught and reinforced by the white race.

Walker is self-made, born to former slaves just after Abraham Lincoln issued the Emancipation Proclamation. She becomes one of the richest self-made women in America of her time. That’s an amazing tale right there, but that she becomes wealthy because of pioneering hair care for Black people during turn-of-the-century America is mesmerizing.

I wish. I wish the series would have slowed down and allowed the audience more time with Walker as she built her empire, spent more time with her as she wrestled with self-doubt and prejudice. More time connecting the past struggles to the present because, and I think she would be surprised, for African American women, things are not booming. What would Walker say to that, I wonder?

Walker’s world looks like you are on a soundstage. Shame on the creative team. The colors they chose are jarring. It’s over-theatrical and not authentic to the time period. I won’t accept the argument that audiences, our audiences, won’t connect unless we throw a coat of paint over our history. A good story well-told is a good story well-told.

And there is the issue of some bad casting choices. I offer as an example Walker’s daughter, Lelia, played by Tiffany Haddish, who is supposed to be 18 years Spencer’s junior. As her daughter she is absolutely miscast here and it’s a shame, because Lelia’s budding lesbian romance is one of the more interesting relationships presented in the series. I can only imagine the tremendous list of qualified and better-suited actresses not hired that could have brought such life to Lelia.